Two million vehicles cross the channel into the UK via the Dover Straits every year and it is estimated that half of them contain food. That is an average of 5,500 large trucks per day, and on peak days this could rise to 8,000 vehicles. The products moved range from meat and cheese, through to fruit and vegetables, but there are also quantities of raw and processed ingredients, animal feed and beverages. However, the movement of food is not confined to the Dover Straits. The Republic of Ireland sees significant volumes moving across its borders – 9 million tonnes per year (4.9 million in and 4.1million out) – this equates to approximately 1,400 movements per day. Ireland is critical to trade, representing up to 70% of the tonnage and 50% of the value traded by the UK with the EU in some of the food sub-segments (with average figures at 18% of tonnes and 19% of value). The UK’s food trade back into mainland Europe is out of balance with the inbound flows, but is nonetheless substantial. Trade statistics show the total value of trade into mainland Europe is €10.2 billion and the tonnage is approximately 7.3million, equating to roughly 1,100 vehicles per day[1]. It is a two-way challenge for infrastructure and capacity. If the vehicles passing the Dover Straits are held for any length of time as part of increased border inspections, the implications for shippers are many – including reduced shelf life, waste, increased stocks and cost, as well as the risk of unreliability – all of which can severely disrupt the supply chain and ultimately impact the consumer. For the authorities, a day’s delay on inbound for the Dover Straits will require 100 kilometres of queuing road space on an average day. And that is just for food.

Alongside these operational challenges, the consensus view from published sources is that the food industry will be the most economically disadvantaged of all industrial sectors in the event of a so-called ‘hard’ Brexit[2]. Alan Braithwaite, BearingPoint, and Vasileios Kotios, Cranfield School of Management, have prepared a detailed analysis[3] of likely tariff impositions on the basis that the UK’s relationship with the EU falls back to WTO terms. The impact of ad-valorum and non ad-valorum (weight and content based) tariffs ranges from 13% for fish to 51% for dairy and eggs. Vegetables, fruit and processed foods will be around 12%. The analysis is shown in Figure 1 which also shows the significance of non ad-valorum tariffs as a % of the total impost.

There is an extremely complex picture in terms of the commodities traded and the balance of trade between the UK and the EU27 by specific country.  The protective effect of the common agricultural policy means that for some commodities it will be better to buy internationally – a case in point is chicken meat where net economic impact is much greater than the average for SITC 01, as shown in Figure 1; 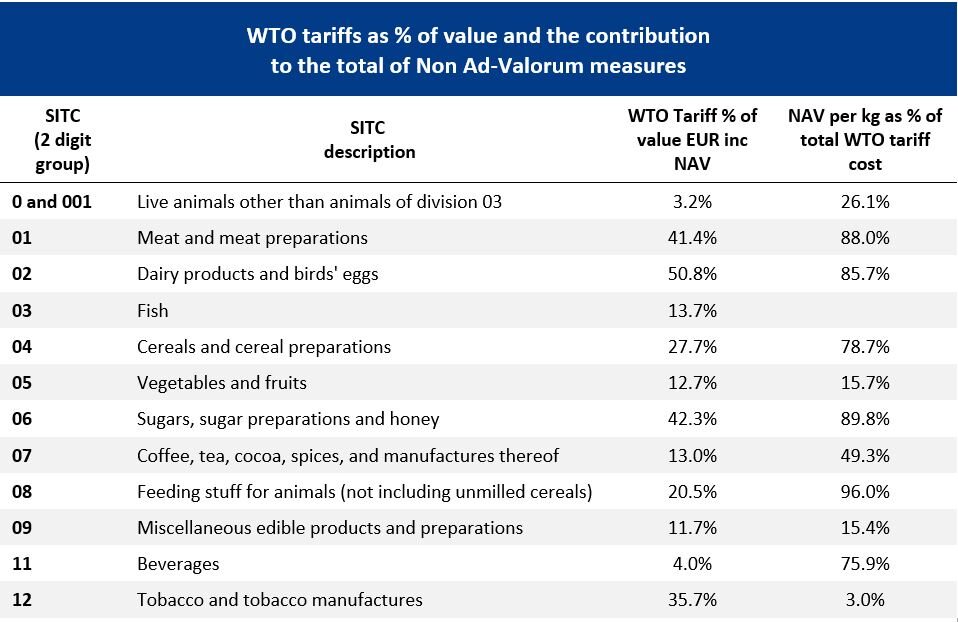 There is also strong evidence of a substantial ‘Rotterdam effect’ for UK imports, where goods are cleared in Rotterdam and Antwerp and moved by road to the UK. As a result, there are opportunities for UK Food businesses to ‘straighten out’ their supply chains, potentially repatriating some production and re-aligning import flows. With the potentially damaging effects of a hard Brexit to UK farmers as the support mechanism provided by the CAP changes, there may be some new opportunities for closer alignment between UK home production and UK based manufacturing businesses.

The combination of tariffs and supply chain risk/opportunity will be company specific. Planning in the context of the potential impact for the business will be crucial to understand the extent to which companies will be able to adapt to the new world post-Brexit, including the specific measures that will maximise mitigation. Those companies operating within the food sector who carefully map their supply chains, origins of materials, and value added to identify short, medium and long-term actions will benefit significantly. Supply chain mapping is an established process, but few companies look beyond their direct suppliers and truly understand the tariff, non-tariff and transport impacts. There are opportunities, but also limited time to act.