Dublin, 4th February, 2013: An international report highlights an Irish Government Department as an example of how the public sector organisations can accelerate modernisation and reform.

The latest BearingPoint Institute report says that in a sector that has traditionally been risk averse and slow to change, Ireland’s Department of Social Protection (DSP) has boosted service at a time of peak demand and restricted public sector recruitment (Faster, higher, stronger: government administration can sprint too).

“There is broad agreement that economies everywhere need to accelerate public sector modernisation and reform as a key element of economic recovery. The challenge has been how to achieve this and this report sees Ireland’s DSP as a role model for public sector organisations in other countries,” commented Hughes Verdier, Public Services Industry Leader at BearingPoint Europe.

He added, “The DSP’s annual budget of over €20 billion accounts for approximately 40% of Irish Government spending so it is absolutely vital that efficiencies in delivery are maximised while maintaining good customer service and proper controls.”

“The value of Agile Government is in helping Government administrations both plan and implement policy change and reform faster, and within their term of office,” said Andrew Montgomery, Head of Public Services, BearingPoint Ireland. “But this doesn’t just apply to public sector organisations: many large corporations have and can also benefit from taking an agile transformation approach.”

The burden on the Department of Social Protection over the last few years has been constantly increasing, to the extent that it now processes over 87 million payment transactions a year. Each week approximately 1.4 million people receive a social welfare payment and, when qualified adults and children are included, a total of 2.1 million people benefit from payments.

The BearingPoint Report says that the Department has managed this modernisation programme through a combination of management and technology initiatives, all of which focused on improving the agility of their business operations, systems and people. “This has allowed the Department to respond more rapidly to Government policy and provide more cost effective services to citizens,” said Andrew Montgomery, BearingPoint.

The report says that Government organisations in other countries could learn from the DSP’s service delivery modernisation programme which has been implemented over the last ten years as it included many innovative approaches and methods to solving the business and technology challenges at hand.

"This was a new way of doing things involving major business and technology transformation right across our business. Our staff deserve great credit for buying in to it and helping to make it happen," said Niall Barry, IT Director, DSP.

“But innovation without the associated tangible benefits – defined by them as measurable improvements in their strategic, operational and technical agility – was never going to be considered a successful outcome for the DSP,” added Paul Allen, Client Director in BearingPoint Ireland.

An agile approach to business and technology transformation delivers benefits in sprints over a period of weeks or months compared to traditional technology implementation which can take years. Agile involves business users from the start and empowers teams. Embedded within agility is the flexibility to accept change as business needs or Government policy requires.

“The DSP experience shows how a complex Government agency can become agile – and is a practical reference for other public and private sector organisations regardless of size, service or country,” said Paul Allen, BearingPoint. “The most agile agencies focus on customer service, organisational change capabilities and leadership. The benefits of pursuing agility as an organisational vision and strategy are clear. They include: improved productivity, enhanced employee and customer satisfaction in addition to higher quality services for customers.

“For too long, governments across the globe have employed 20th century tools, structures and processes to solve 21st century problems and all too often, this has resulted in waste and slow, inadequate service by governments to their customers.”

The report concludes by stating that agile government is not about completely discarding the culture of government, or to blindly copy the practices of the private sector. “Instead it is to leverage the core values of public service and to adapt practices, seek new standards of quality, understand citizen expectations, and to create innovative partnerships among public services and with the private sector”.

For more information and to order a copy of the BearingPoint Institute Report please visit: www.bearingpointinstitute.com.
An extract of the article ‘Faster, Faster, Higher, Stronger: government administrations can sprint too’ can be downloaded here: http://bit.ly/VAMH6J. The report may also be downloaded as an iPad app: http://bit.ly/BEIapp

By designing and implementing both a new technology architecture – encompassing the technology implementation of the DSP’s Business Object Model and new tools, agile techniques and practices for systems design, development and implementation, the DSP can point to the following as the key results that have been achieved:

DSP now releases new business functionality on a monthly basis with a four week delivery cycle between releases. Coupled with Continuous Integration, where the delivery team ensures quality by integrating and testing its work frequently. Continuous Delivery in DSP has resulted in:

The DSP looked to embed agility in its organisation by taking a broad and transformational view which encompassed four core aspects:

Founded in 2009, the BearingPoint Institute is an incisive, authoritative voice on business-critical topics, which brings together the finest minds from both within and outside the BearingPoint organisation. We strive to: 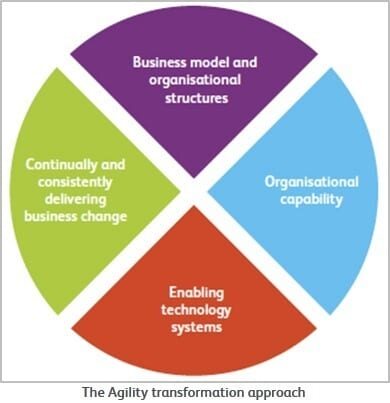