I am a Technology Analyst in the IT Strategy and Transformation (ITST) team in BearingPoint. I graduated from Trinity College with a degree in Computer Engineering in 2014 and joined BearingPoint just a few months later. Almost straight away I was on a team working directly with the client on a new project in the pharmaceutical sector as an Automated Testing Engineer. This role gave me great experience not only with client interaction but it also gave me an appreciation of the role of testers as I moved on into a development role on my next project, which was in the financial sector. My responsibilities on this project have grown from fixing small defects to designing big new features and being one of the main developers on the project.

Every day is different and has its own challenges but usually, the day starts with a daily stand-up, a feature of agile project management. It's a 15 minute meeting where each person gives an update on what they're working on and raises any issues they have. After that there might be a phone call between our team leads and the client's team leaders to update each other on how all aspects of the project are going. Initially I wasn't involved in these meetings, but I joined after I became more senior in the project. When all that is finished, I begin work on the tasks assigned to me. This involves code development and discussions with software testers and business analysts both from the client and from BearingPoint. I really enjoy problem solving so whether it's a bug that needs fixing or a new feature that needs development, I get great satisfaction from overcoming the issues and delivering the product to the client's requirements.

Apart from project work, I can also set time set aside so that I can work on some training or study. I've been studying in preparation for the Oracle Certified Associate Java SE 7 Programmer exam and becoming a certified Java developer.

Outside work I spend most of my time playing hockey, hanging out with friends and watching sport. I also play the piano and speak French which I'm trying to improve. Taking holidays is stress free in BearingPoint; so far I've been granted any days off I've asked for - sun holidays are important when you live in Ireland but I also enjoy going away to get some skiing in! Apart from that there's also something to be said for just putting your feet up and relaxing!

For many reasons BearingPoint is a great place to work. I felt welcome as soon as I joined; I had invitations to lunch, people were greeting me by name and striking up conversations in the kitchen and around the office. As well as that, everyone, no matter how senior, is approachable and that's a great thing to have in a company. There are also regular social events which are always good fun and great for getting to know people from different projects who you might not interact with often.

BearingPoint is also very dedicated to your development – as much as it is to its own. As mentioned above, I can have time set aside from project work to do things that improve my skills and there is a performance manager assigned to each employee who will guide you in your career and your development. Soon after you join, you go on a week-long consulting training course during which you learn a lot but you also have brilliant fun both with colleagues from your own office and those from other practices around Europe. 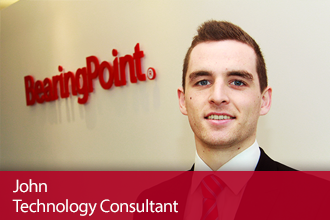