Banks are spending billions of euros digitising back-office functions and customer services in an attempt to cut costs, increase sales, and attract and retain customers. How are they doing?

A report* by the BearingPoint Institute has given the industry a digital score card by analysing 48 European banks: the digital technology they are using and what they are doing well and badly.

We placed banks into three categories: ‘digital leaders’, the ‘digital shy’ and ‘digital laggards’ and three levels of digitisation: low (legacy systems are predominant and several processes are paper-based and/or performed manually), intermediate (majority of processes are automated and online),  and high (they have a high degree of automation and digitisation. The internet, intranet, mobile apps and mobile phones are central to their businesses. Their work culture encourages digital innovation and continual improvement).

These banks were mainly online or ‘direct’ (banks without high-street branches (such as ING DiBa, the successful online banking operation of German bank ING). They’ve digitised much of their business. Some have even created their own technology start-ups. They encourage innovation, and their organisational structure and culture helps to support digitalisation across the business. Online technology and mobile apps etc. are integral to their business.

Major commercial banks and cooperative banks are typically in the digital mid-table. They offer a lot of different services. They’re good at digitising retail banking although there’s still a long way to go before they’re fully digitised. Most of their processes are automated. Online technology is part of their daily business.

Regional banks and local branches of foreign banks. These banks are “passive” in their use of digital technology.

They let their customers call the shots. Why?

Possibly because of conservative work cultures but also mostly because they don't have enough cash for the most ambitious digital projects.

Still, most banks aspire to be technology trailblazers.

Almost all (95%) of banks we surveyed said that introducing innovative technology in banking gives them “first mover advantage.” (see graph below).

Fine. But what are the banks doing that’s innovative? Our survey suggests that there is a big gap between banks’ rhetoric about digitisation and their actions. 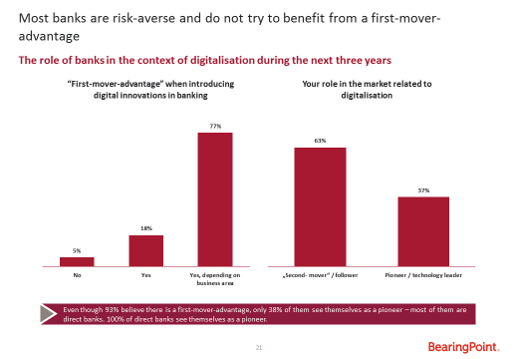 Friend not foe: Why blockchain is a big opportunity for banks

What is the role of mobile in enabling financial inclusion?

Can there be such a thing as "digital finance"?

The secrets of digital success: Why digital banking projects succeed − and fail