Financial inclusion is no longer just a talking point. It has been singled out by the United Nations as a key goal as part of its 2020 priorities.

Some 2.5 billion people do not have access to basic financial services, turning instead to cash and informal mechanisms that can be both expensive and risky. ‘Low-income populations (earning less than 10 dollars per day) are the most at risk and most vulnerable to financial risks,’ says Solenn Marquette, Senegal representative for BIMA.

The obstacles (note 1) here are as much cultural as structural: economies of scale can be difficult to achieve in poorer countries with low urbanisation, limited access to information and where people have much higher levels of confidence in the existing, mainly cash economy than more formal alternatives. Public service institutions with a mission to educate the citizenship about these matters are neither well-equipped nor particularly trusted.

Mobile financial services make up a decisive part of the solution. A fact already demonstrated by the success of mobile payments in developing countries over the past decade: it was the first financial service used by millions offering secure and straightforward access to money, and enabling transactions between individuals and businesses alike.

What’s different today is that mobile financial service provision is poised to extend beyond the solid base of mobile payments. Although 90% of people living on less than 2 dollars per day do not enjoy such ‘advanced’ financial services, recent technological advances in micro-savings, micro-loans and micro-insurance appear set to change things.

Unbanked populations will hide money at home, leave it with a family member or trusted party (including local credit unions). Such mechanisms are at high risk of loss or theft, and access to savings can be a challenge. A secure, convenient, and inexpensive technological approach to micro-savings and micro-loans has the potential to cut through these longstanding problems.

This technology is also attractive to banks because they can realise economies of scale and reduce their operating costs. More broadly, it is thought that greater financial stability - afforded by mobile financial services - will enhance productivity, facilitate local investment and mitigate against other societal risks, helping lift populations out of poverty.

By their nature, micro-insurance policies bring in very low levels of revenue for insurance companies, which means they depend on careful due diligence in terms of both underwriting and policy terms.

Interestingly, however, the hybrid nature of mobile finance can be harnessed. At the start of 2014, a third of mobile micro-insurance products were offered free of charge based on a customer’s mobile usage. For example, specialist provider Micro-Ensure reported 6-15% increase in mobile ARPU and 10-25% reduction in customer churn (note 2). The result is a clear win-win for customers and providers.

Such services have inevitably changed the relationship between telcos and banks. In principle, two models exist: either telcos offer services directly to their customers without involving the banks, or they act as a conduit for services from the banks. In practice, however, many models are a hybrid, with the specific features depending largely on local regulatory frameworks.

Regulators are increasingly recognising the role of telcos and banks, as well as non-banking institutions, in reducing overall poverty. For this reason, the regulatory framework is flexing, as illustrated by significant reforms adopted in 2014 in Colombia, Kenya, Liberia and India. Today, more than half of the countries leveraging mobile financial services (47 out of 89 countries in 2014) have legislation in place that enables non-bank providers to deliver financial services (note 3). In Morocco, for example, a national platform for mobile payments has been developed jointly by telecoms and banking authorities, to be adopted by both when it is deployed in 2017.

Opportunities for continued progress exist – not least enabling mobile payments for merchants and retailers (only a quarter of the 258,000 shops linked to a mobile account were active in 2014, for example) (note 4). And numerous problems remain – such as the need to balance simplicity of use with the traceability of transactions, as well as regulatory weaknesses in some countries.

We are clearly near the beginning of a digital revolution in the development of emerging countries. Technology is one part of the answer, but it hinges on mechanisms that recognise the cultural and societal changes that follow. Says Mouna Fouillade, director of marketing and communication for Africa at Ingenico Group, ‘To launch in a country, it is fundamental to bring not only technology but also customer training and education.’

The result, however, is a highly positive impact on the economic development of local populations and indeed providers. The mobile payment market was worth $235 billion in 2013 across 245 million users (note 5), with a predicted growth to $721 billion across 450 million users in 2017. In 2014, more that 103 million bank accounts were active (note 6), compared to 61 million a year before (note 7). As a consequence, citizens can manage their finances safely and more easily, and this should benefit their communities overall. 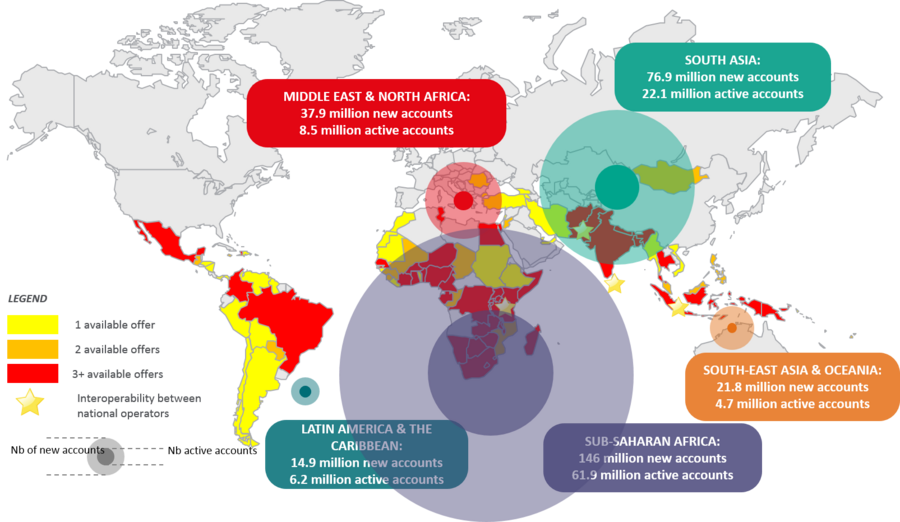