BearingPoint Partner and China General Manager, Yvon Donval, offers a perspective on China’s changing role in the global economy, the new opportunities this brings for companies and how they can be approached.

Walk down any street in a city in China and you would be forgiven for thinking that the global economic downturn never happened. There is a buzz, an energy that percolates the attitudes of everybody from top executives to street cleaners. All in all, it is a far cry from the grumblings of Europe, still struggling to emerge from crises in both economics and confidence.

It is a far cry from the grumblings of Europe, still struggling to emerge from crises in both economics and confidence

Over the past two decades, China has developed a hard-earned reputation as a global manufacturing champion. In building its manufacturing foundations the country’s main priority was growth (note 1). Low costs allowed Chinese manufacturers to satisfy foreign as well as domestic demand, driving a first wave of growth characterised by the outsourcing of production by large Western companies.

Despite being the world’s fastest growing major economy over the last decade (note 2), China has not been without its challenges, as demonstrated by the reform agenda set out by the Government at the beginning of 2013. The agenda was dedicated to support further growth and deliver a stable fiscal base, at the same time as tackling key issues such as pollution and the economic gap with China’s rural population.

At the heart of this reform agenda lies a recognition of China’s changing role in the global economy. While the country is still an important manufacturing centre, it lacks the comparative advantage of 15 years ago. Wages are increasing, as labour is in shorter supply (note 3), and rising wholesale energy costs (note 4) are significantly impacting transportation, logistics and plant operations.

Some are predicting a decline in Chinese manufacturing, but we would suggest this is more of a normalisation, as organisations turn their attention to reducing costs by increasing plant productivity and product quality. China has traditionally prioritised manual labour over automation, limiting potential efficiency gains:

Figure 1: China's late surge past the US is fueling the rise of China's middle class 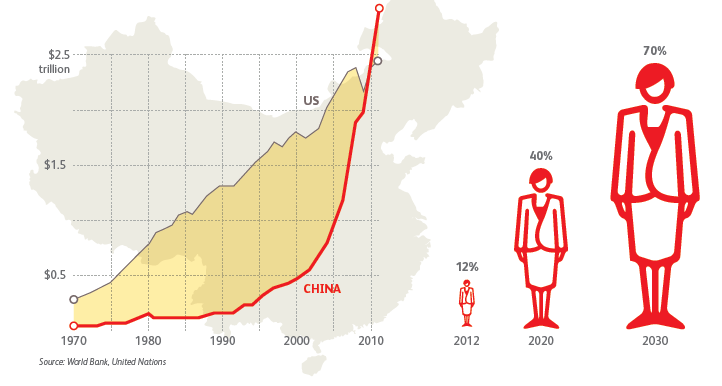 The GDP per worker in China is only 17% that of US workers (note 5). This is an equivalent output ratio of five Chinese workers to one American; to reduce this ratio by even one person would have a significant impact on overall efficiency. In the short term this normalisation should lead local manufacturers and ‘implants’ to reduce the labour intensity of their production.

At the same time, a significant opportunity comes from leveraging China’s domestic market, currently exploding through the relentless growth of its middle classes. According to World Bank standards, by 2030 over 70% of China’s population is expected to be middle class (note 6). This new generation are sophisticated new customers – well-educated, hard-working and optimistic.

Foreign organisations looking to capitalise on this trend are shifting their own manufacturing and operational activities closer to the action. Boeing, for example, is expanding its manufacturing plants in China, not just to gain a cost advantage but also to respond to local demand and improve the company’s footprint across the Far East (note 7).

Some organisations are taking this line of strategic thinking a stage further. Two years ago, French company Schneider Electric made the decision to relocate its executive committee and general offices to Hong Kong (note 8). Core to this move was the recognition that the company’s future growth would be concentrated in the Asia Pacific market. Other Western companies across the aerospace, automotive and B2B sectors, are thinking similarly. Indeed, according to the IMF, an annual average of USD 260 billion (note 9) of foreign investment came into China in 2010–12 (note 10).

A significant opportunity comes from leveraging China's domestic market, exploding through the growth of the middle class

So, what can we advise European organisations considering setting up operations in China? The middle-class explosion offers a new wave of opportunity for organisations that do not yet have an established presence in the country. While the specific details of how to respond depends on the sector, the advice we are offering our clients is based on a two-pronged strategy.

According to the IMF, an annual average of USD 260 billion of foreign investment came into China in 2010-12

First, organisations must to do their homework. Not only in terms of business models but also to acknowledge that China is just as culturally sophisticated as Europe. Understanding those ‘soft’ aspects can become a critical success or failure factor. This requirement is starkly illustrated by the challenges experienced by Wal-Mart in China. Stiff competition from domestic firms and issues with local authorities, coupled with senior executive resignations (note 11) led to a 12-year wait to turn a profit (note 12).

Second, it is important to recognise that China is a long-term, two-way partnership opportunity; a chance to acknowledge the shift in the global landscape of supply and demand. For example, Chinese firm Hon Hai/FoxConn is opening a manufacturing plant in California, to better satisfy the needs of its US clients (note 13). As such global dynamics play out, it becomes just as important for Chinese manufacturers to understand the needs of US and European markets as it is currently for Western companies to understand the market dynamics of the Far East. China will no doubt continue to surprise, offering new opportunities even as existing markets continue to expand. European economies may remain in the doldrums for some time yet – but meanwhile, like its population, the Chinese market possesses an optimism that is currently seldom seen elsewhere. No organisation should expand into China without careful thought and planning but, in these tough times, can any organisation afford not to evaluate the opportunities?

A new chapter in the digital revolution: Europe's turn

The Digital Tsunami: Size matters in the digital world

Repaying the stakeholder, not the shareholder

Situational awareness and the City of Chicago

Can innovation be captured, bottled and measured?