Out of over 50 applications from Germany, Austria, Switzerland and Romania, eleven student teams were pre-selected for the grand finale of Be an Innovator Student 2019 in Munich. The event took place at Wayra, the start-up initiative of Telefónica, in Munich, in midst of young entrepreneurs and innovatives. With the support of their BearingPoint coaches, each team presented its pitch and faced challenging questions from the BearingPoint and Wayra jury. This year’s final teams were:

All the exciting, innovative and creative ideas made it very difficult for our jury to pick 3 winner teams, but after a long discussion, the decision was made:

Team ReGreen was represented in the finale by Chistoph Rebernig and Karim Abdel Baky. The students of the University of Vienna founded a cleantech start-up, which has the goal to provide more sustainability. ReGreen’s mission is to calculate the carbon footprint of corporates and support them by offsetting it. Their plan is to certify products, corporates as well as services and mobility as carbon neutral. The long-term goals of the austrian start-up are to become the fair trade seal for carbon offsetting and the biggest provider of carbon offsetting for flight travels. With the support of BearingPoint and Wayra, ReGreen wants push the implementation of a Blockchain solution more forward to guarantee their customers complete transparency when compensation emissions with ReGreen. Also they want to expand their B2B distribution with the support of BearingPoint and Wayra.

We are very happy about the first prize at this year’s “Be an Innovator Student” finale. With our cleantech start-up ReGreen we want to achieve that handling the good flights will become more mindful in the future. 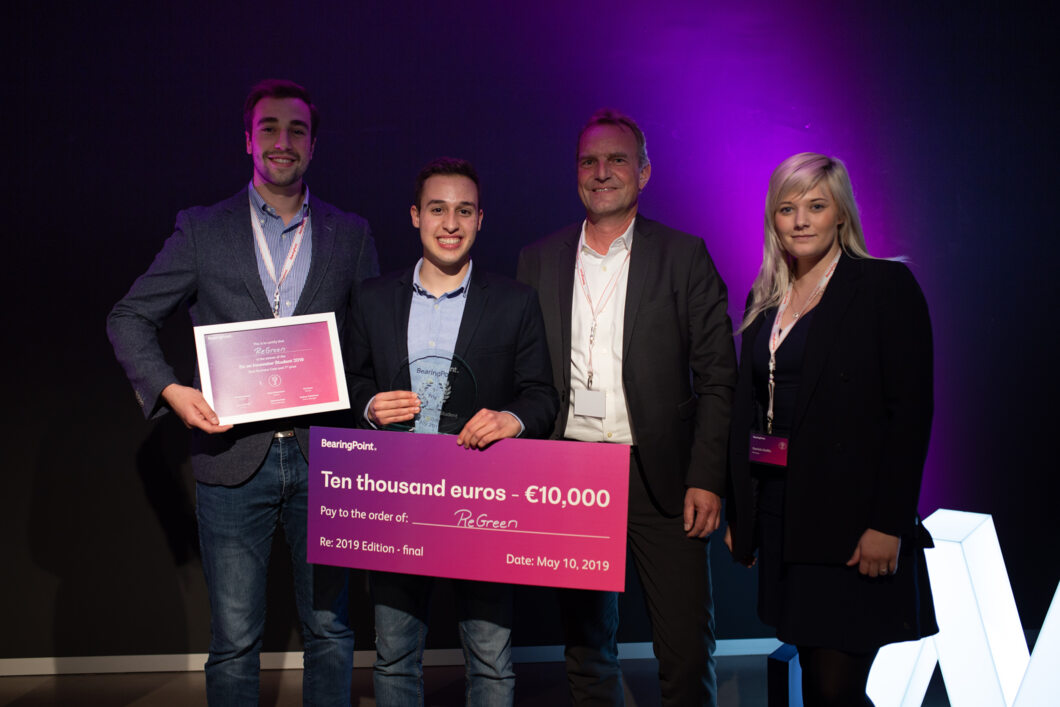 Team Dynamic Video was reprensented by Neele de Vries and Christopher Welz. Dynamic Video aims to replace standardized videos by dynamic ones, which adapt automatically to the viewer, regarding his/hers interests and mood. This video technology will be used for marketing videos, recruiting and product marketing. Within this year Dynamic Video wants to implement Artificial Intelligence in their technology.

The pre-event was really cool to connect with the other start-up’s. Also we received input for a convincing pitch on top of that! The finale was very exciting. There were so many excellent start-up’s with a lot of innovation power. The 2nd prize is amazing! This will push us and the product Dynamic Video much forward. Thank you BearingPoint and Wayra! 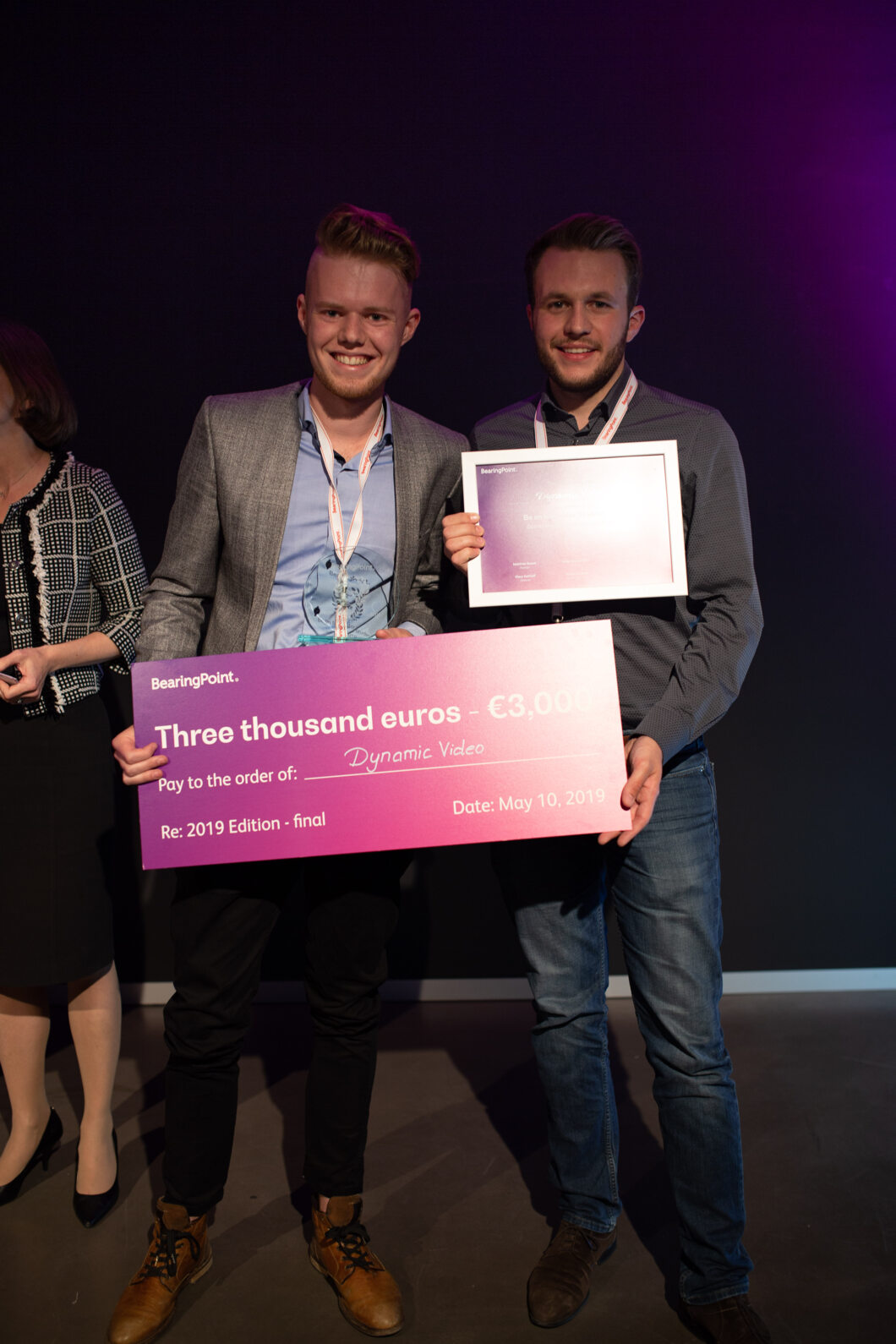 For team AntiFragile Andrei Ionut Ene and Adrian Valentin Gheorghe were on stage at the Be an Innovator Student finale. The students want to improve the control and product safety in the supply chain. Therefore they developed a cost-effective handling racker. The tracker is planned to increase the customer satisfaction and the working efficiency. 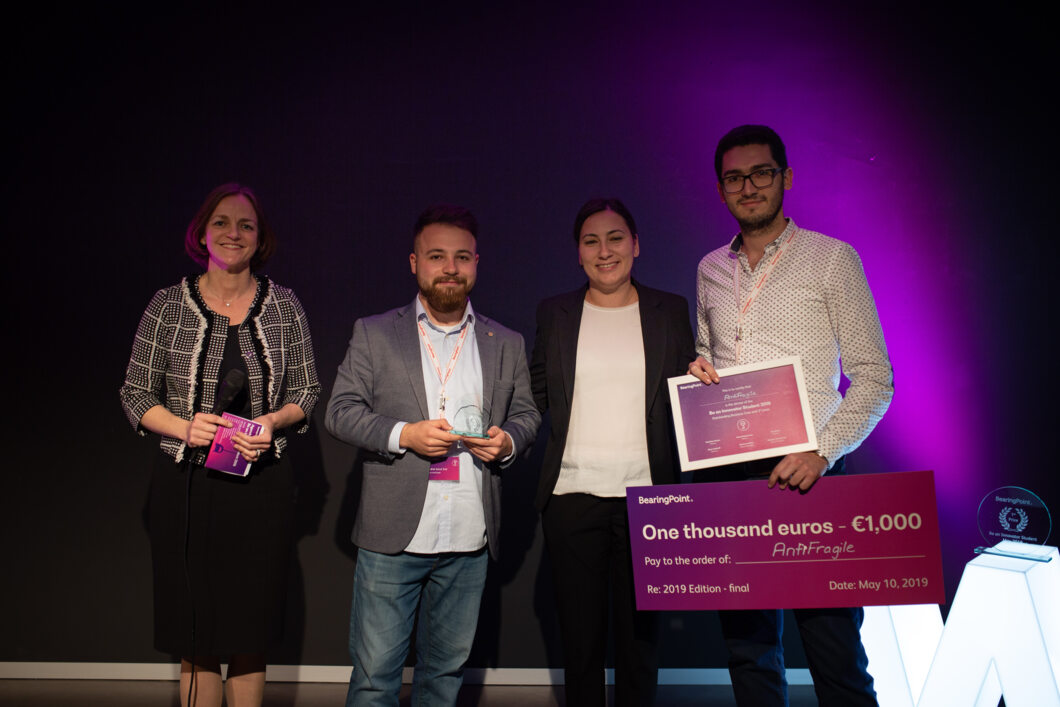