Out of numerous applicants, several student teams from universities in Germany, Austria, Switzerland and Romania qualify to take part at the final event of the start-up contest Be an Innovator Student and have the chance to present their project idea in front of the BearingPoint Jury. Three teams with especially innovative ideas, are then awarded with attractive prizes.

Vlad Macelaru and Costin Costea from Team ClarK presented their AR (Augmented Reality) industrial smart glasses especially developed for the automobile and logistics industry. The smart glasses can provide employees more security and efficiency within the working process by simply localizing and identifying errors digitally in the process.

The team now has the opportunity, with the support from BearingPoint, to realize their idea and to take the next step with their start-up.

The opportunity to participate in the Be an Innovator competition and also visit Berlin motivated and got us working on our prototype and presentation. Everyone there was very well prepared and we learned a thing or two from every team. We're honored and happy to come back home with the prize and to see that our idea got validated once again. 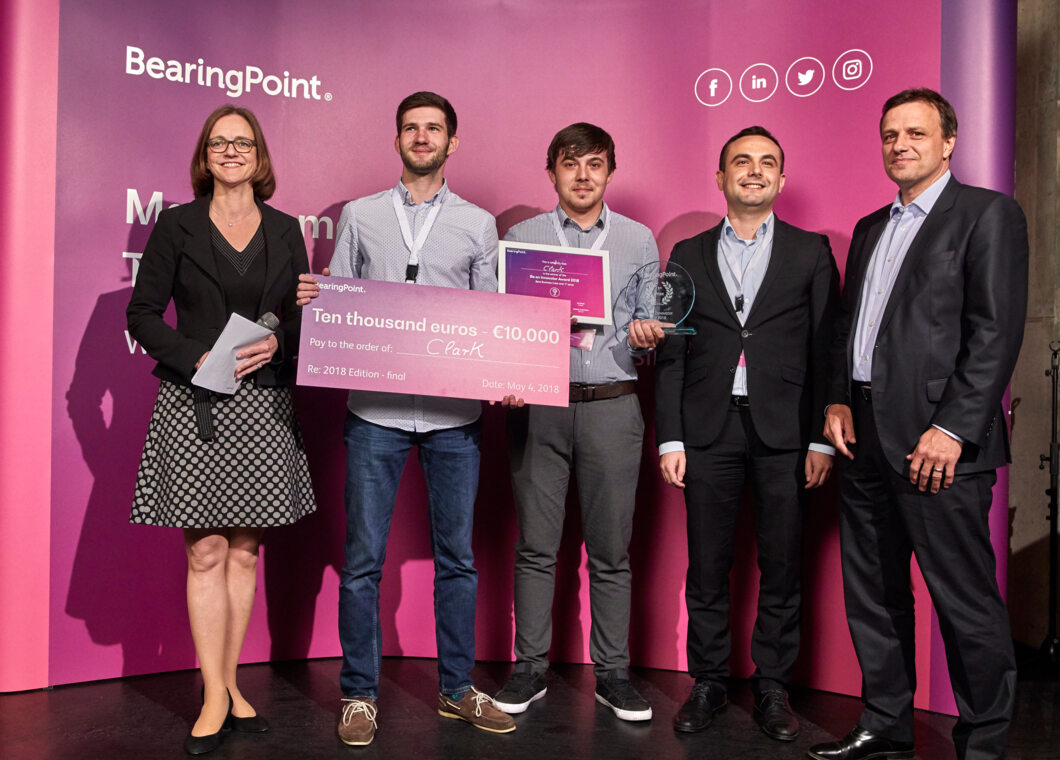 Be an Innovator brought exciting start-ups and young international minds together. The pitches and the mutual exchange/interchange of ideas were deeply inspiring so we are able to take away valuable experiences for our own business. We are proud to take place on the winners´ podium among 58 startups and looking forward to making the next steps with skinow in the future. 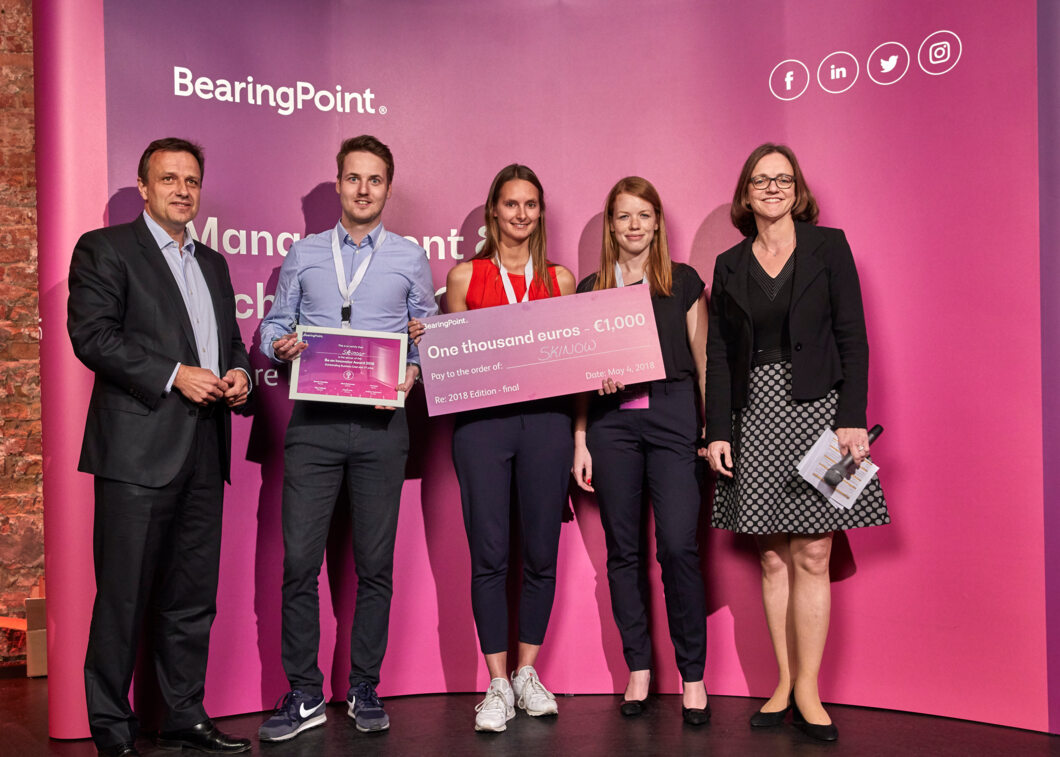 The first place was won by the Swiss Team Skipper from HSG University St.Gallen. Timarian Rust and Andreas Beirholm presented their business model, which was developed for small and medium sized enterprises (SMEs) in order to provide these with more price transparency in the freight container logistics sector. The focus of this digital platform is on the freight routes between the USA and Europe and is supposed to empower SMEs to optimize their logistics and to create a stronger basis for negotiation. 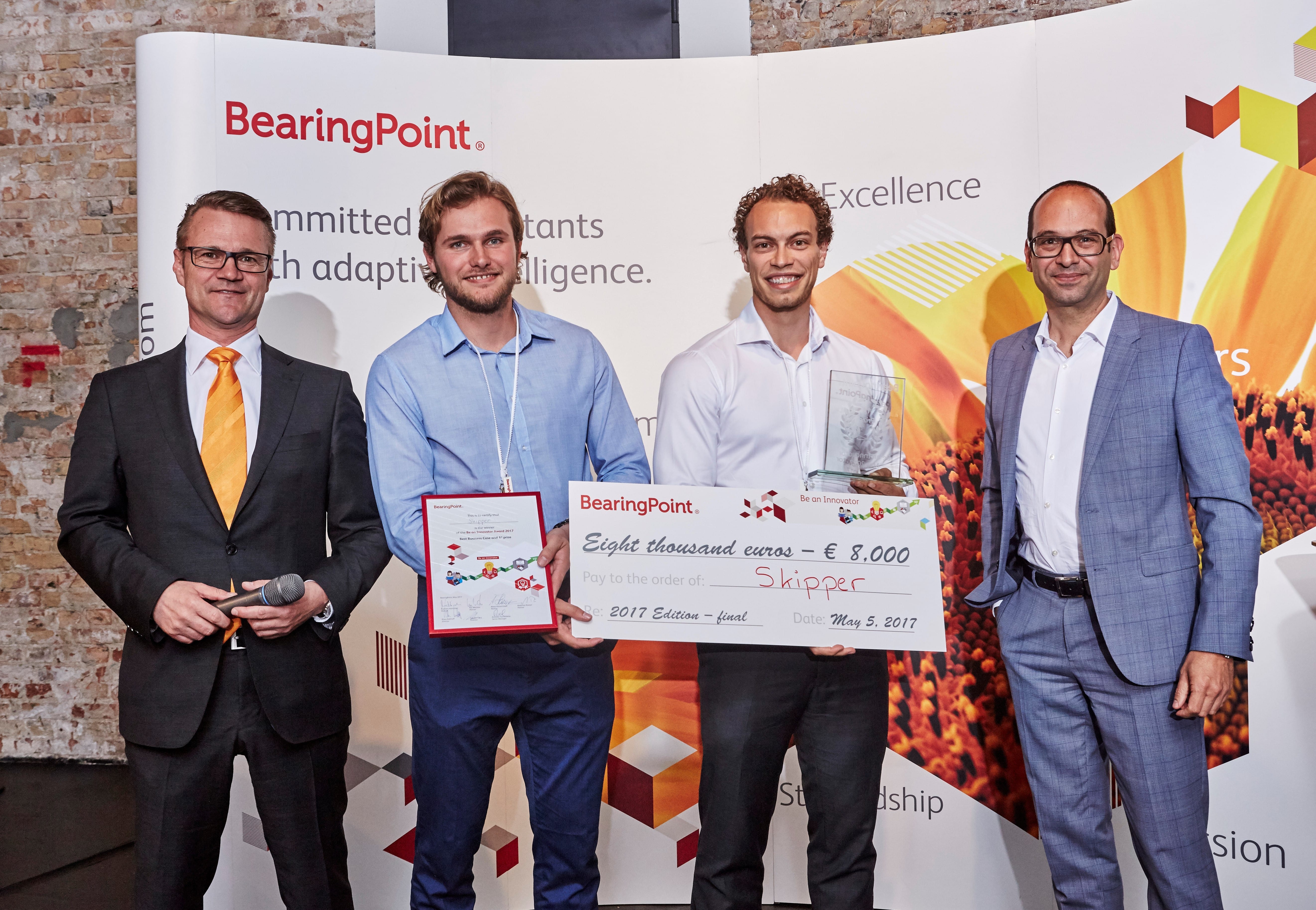 Team Inveox was represented by CEO Maria Driesel and CTO Dominik Sievert. Under the motto “rethinking pathology”, they presented their innovative product: a digitized container for tissue specimine, in order to optimize the process, avoid errors and save costs. 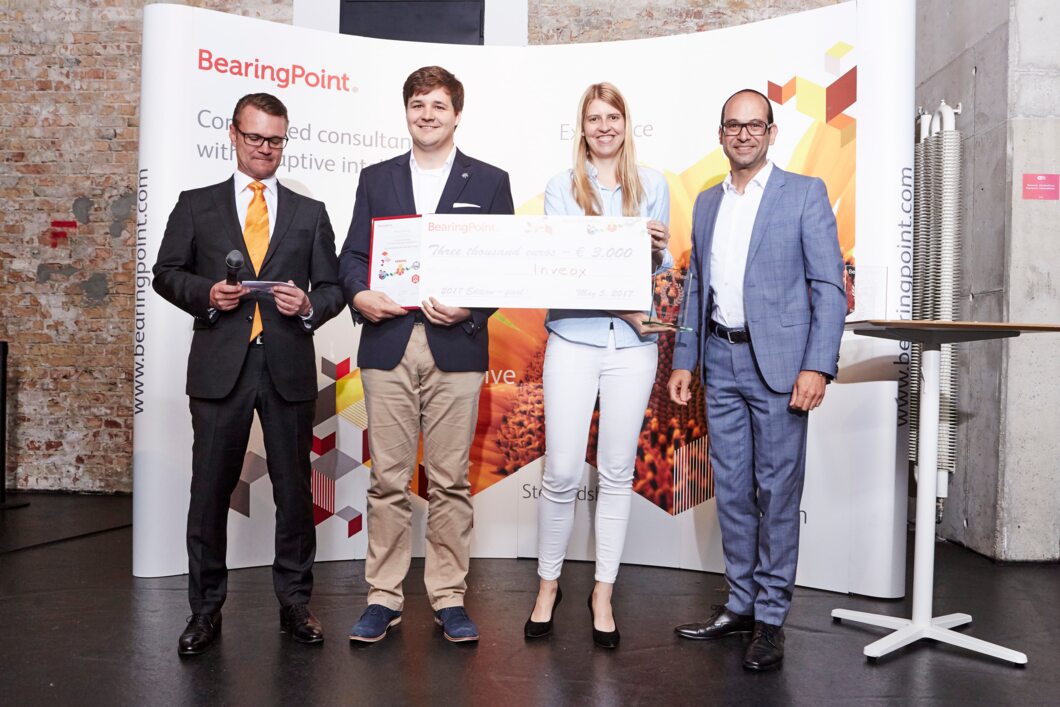 Representing Team RetailQuant, Gordan Volaric and Arcadi Llanza took the stage and presented their digital product idea for stationary retail. A measuring device placed at cash registers is supposed to anonymously record certain demographic parameters of customers and process these into usable data. A whole digital eco-system is being created and therefore, retailers can evaluate the customer behavior and develop according strategies. 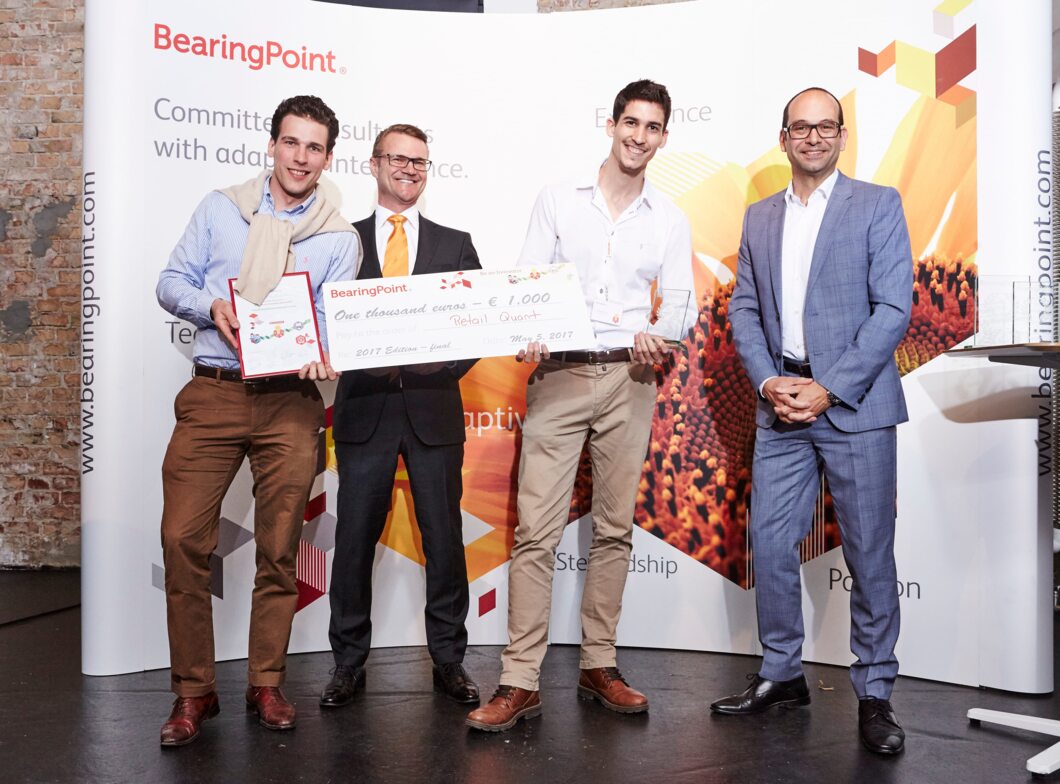 The team EyeScan develops an App, which uses the front camera of a smartphone to track the gaze and movement of the eyes and enables the navigation of the smartphone via gesture-patterns. It enables users with severe handicaps or cerebral disturbances affecting motoric capabilities (in Germany 2.5 Million people) to navigate their smartphones. 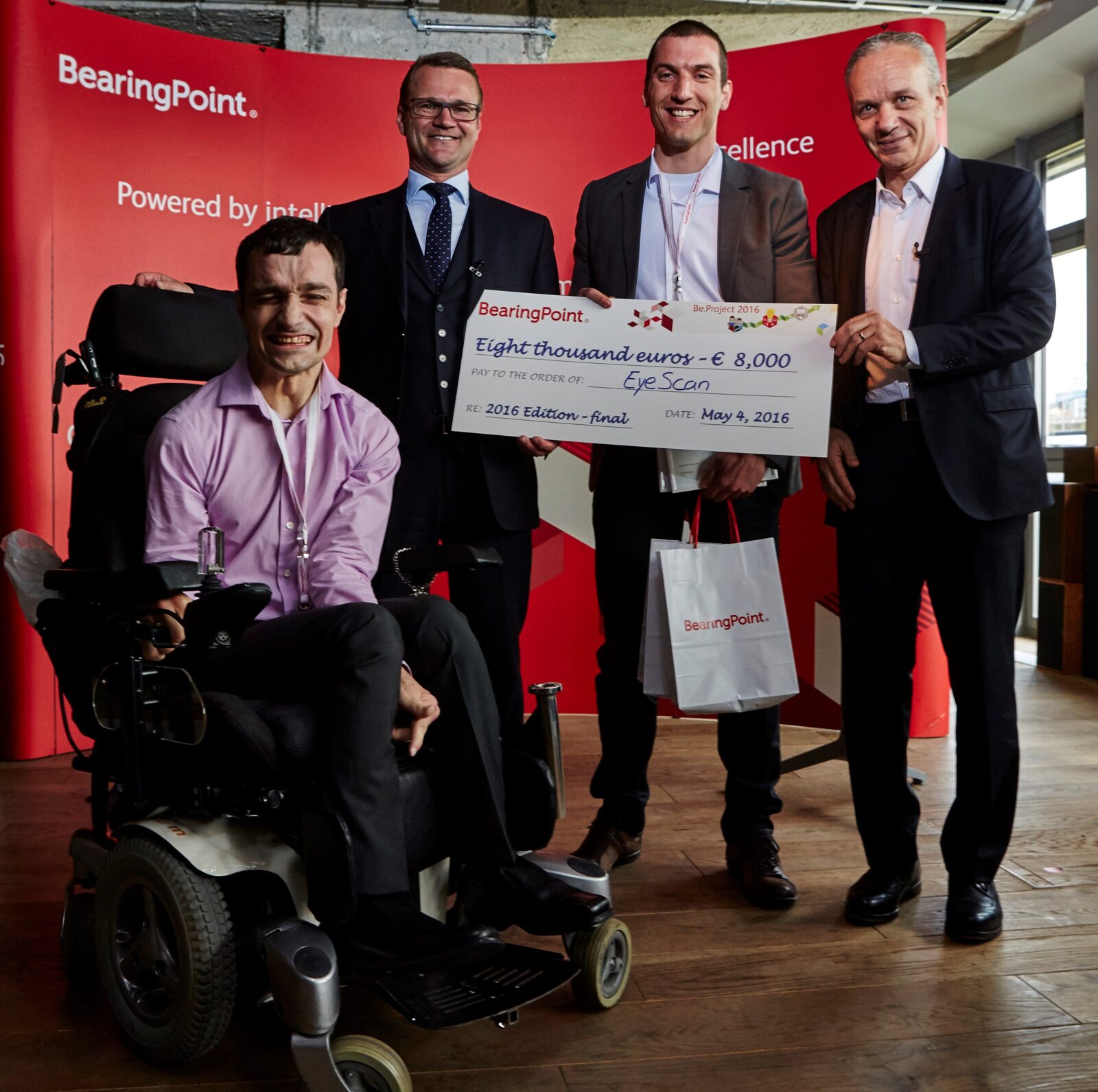 Sensoc develops washable smart socks, which can measure the pressure on the soles via conducting fibre, thereby allowing to analyze and track e.g. gait and pronation/supination. The socks deliver data for doctors, patients and rehabilitation centers via an integrated Bluetooth chip to smartphones and tablets. Approximately 70% of the population in the EU suffers from an (often undetected) malalignment of foot. As a result, roughly €4 billion is spent on physiotherapy every year. These socks help identify health issues and assist during rehabilitation and physiotherapy phases, while increasing accuracy and reducing costs of therapy. 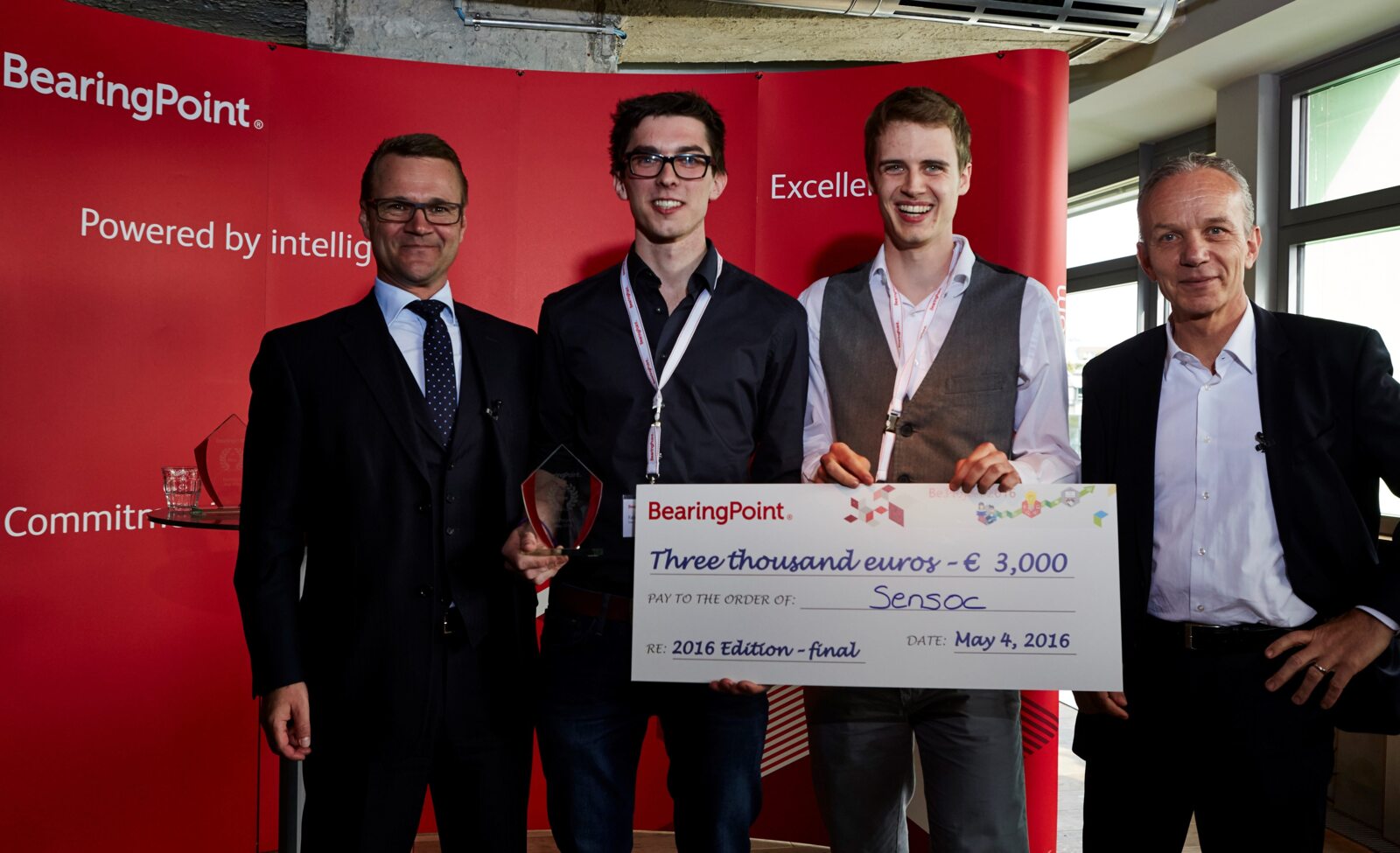 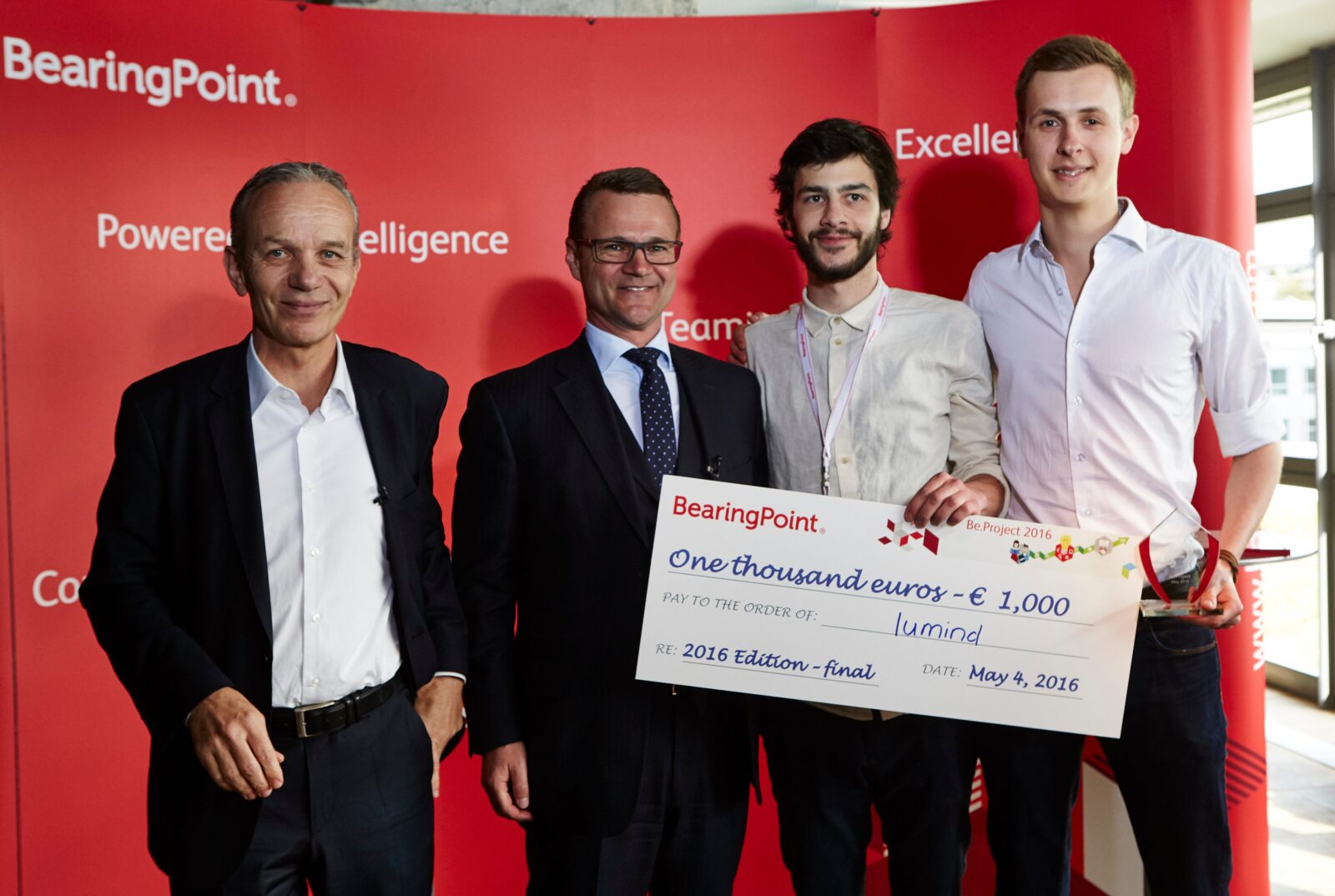 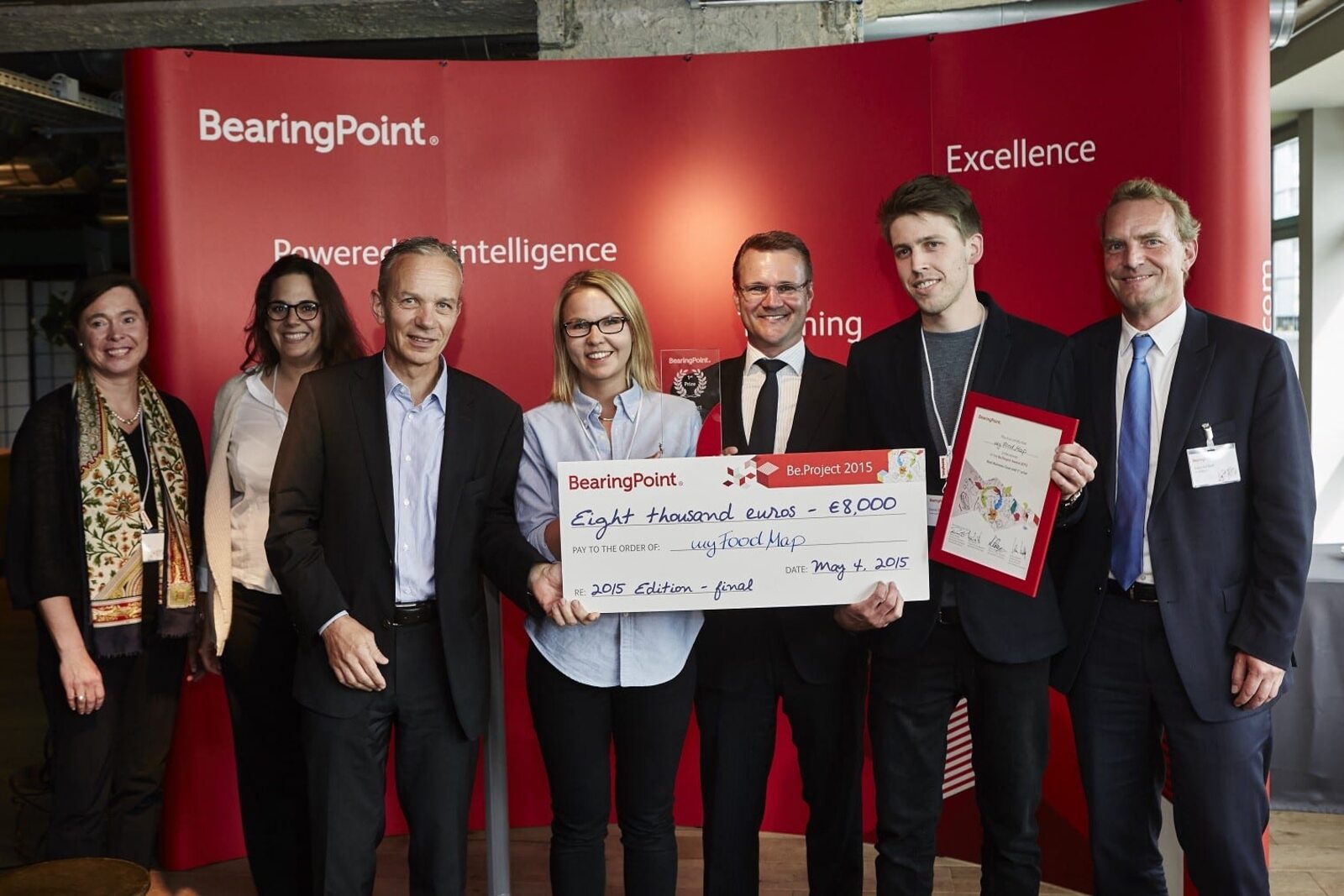 This team is using the mega trend of „free from- food (food for allergy sufferer). People suffering from food intolerances like Lactose, Fructose, Histamine etc. must invest much time to find the right food. The app „freefromMap“ should help them to find suitable products. In cooperation with food shops this is creating a completely new sales channel for the retail. In further steps the project can be enlarged to specific food requests such as „myKosherMap“, „myHalalMap“ or „myLowCarbMap“. 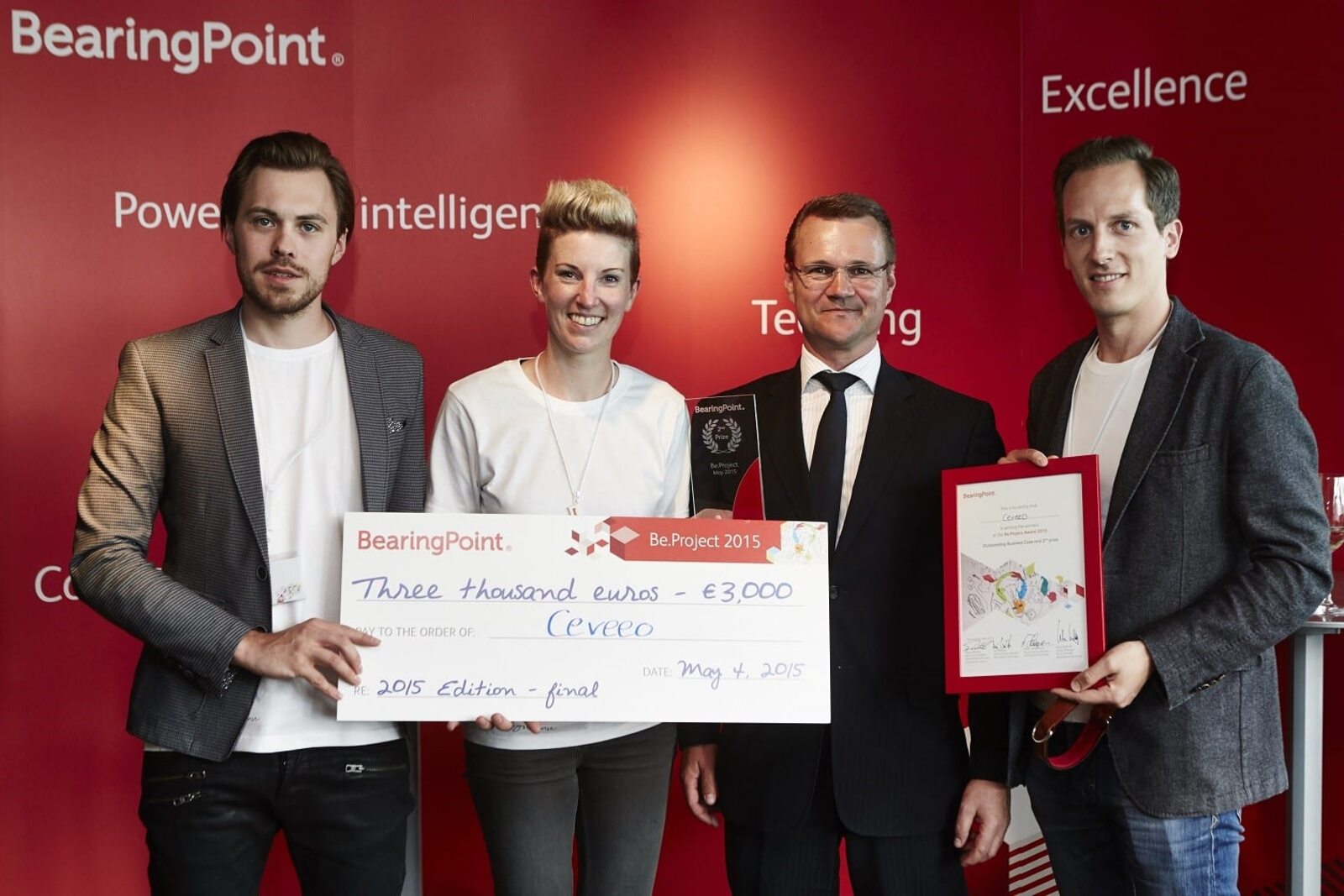 The team could create a new cover for dogs which includes not only a GPS tracker (invisible leash) and an Activity Tracker (pulse, body temperature etc.), but can also detect health problems in an early state. The use of an app makes it possible to trace and understand health problems of the dog. This concept can also be adopted to other animals like horses or even camels. 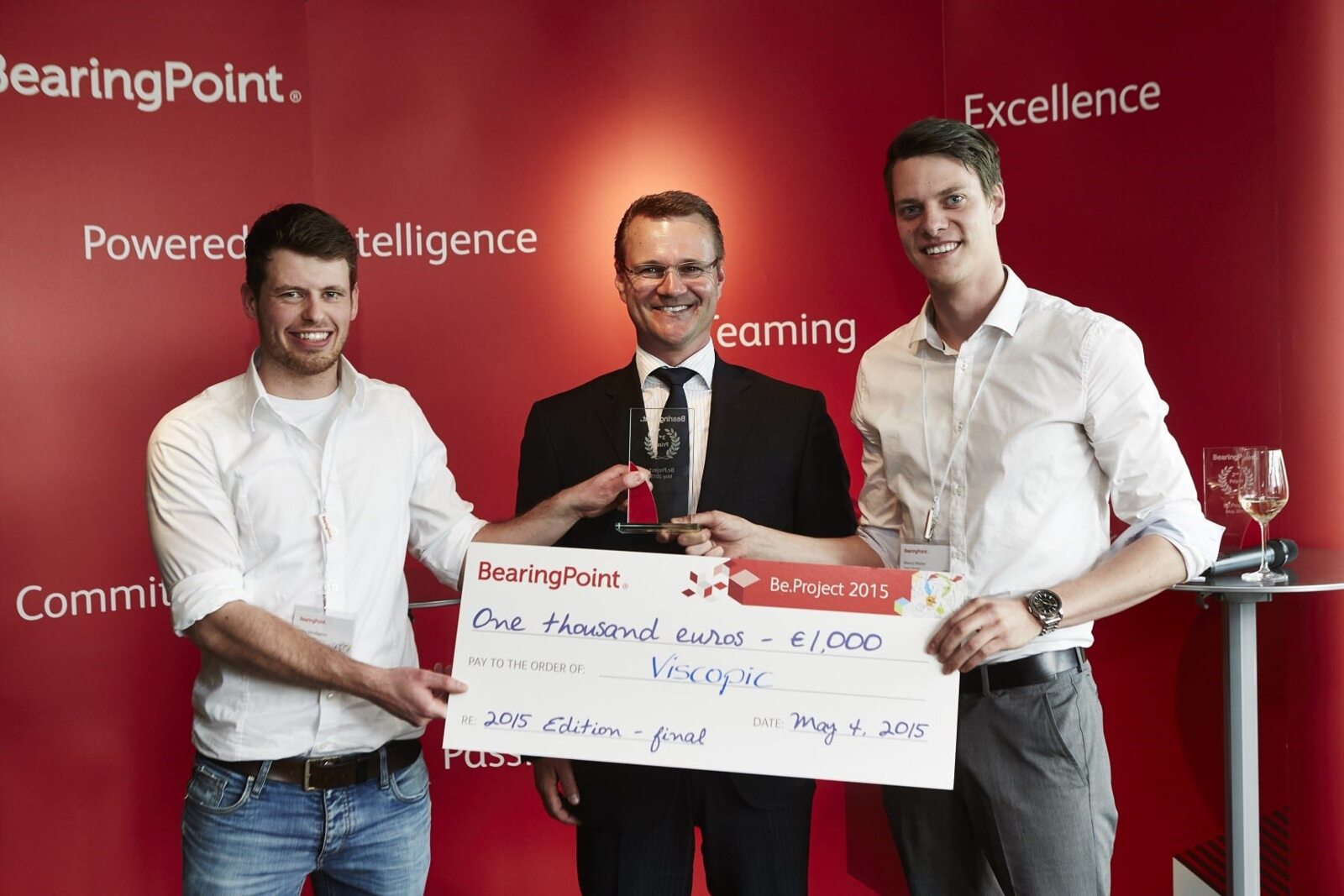 What this team wants is not less than to revolutionize the First Level Support for the machine industry, especially for small and medium-sized companies. With help of Video Live Stream, visualized instructions and Whiteboard-Functionality, the support employee can – from a distance - instruct his colleague respectively the customer how to fix a problem. The objective is to raise the quality and efficiency of the service and therefore to reduce the cost for the First Level Support.

They have developed a smart alarm system which is integrated into a LED bulb and linked with the internet. It is cost-saving, efficient and doesn’t request a video surveillance. The user can control it via app and hence react also in emergency cases via the internet. 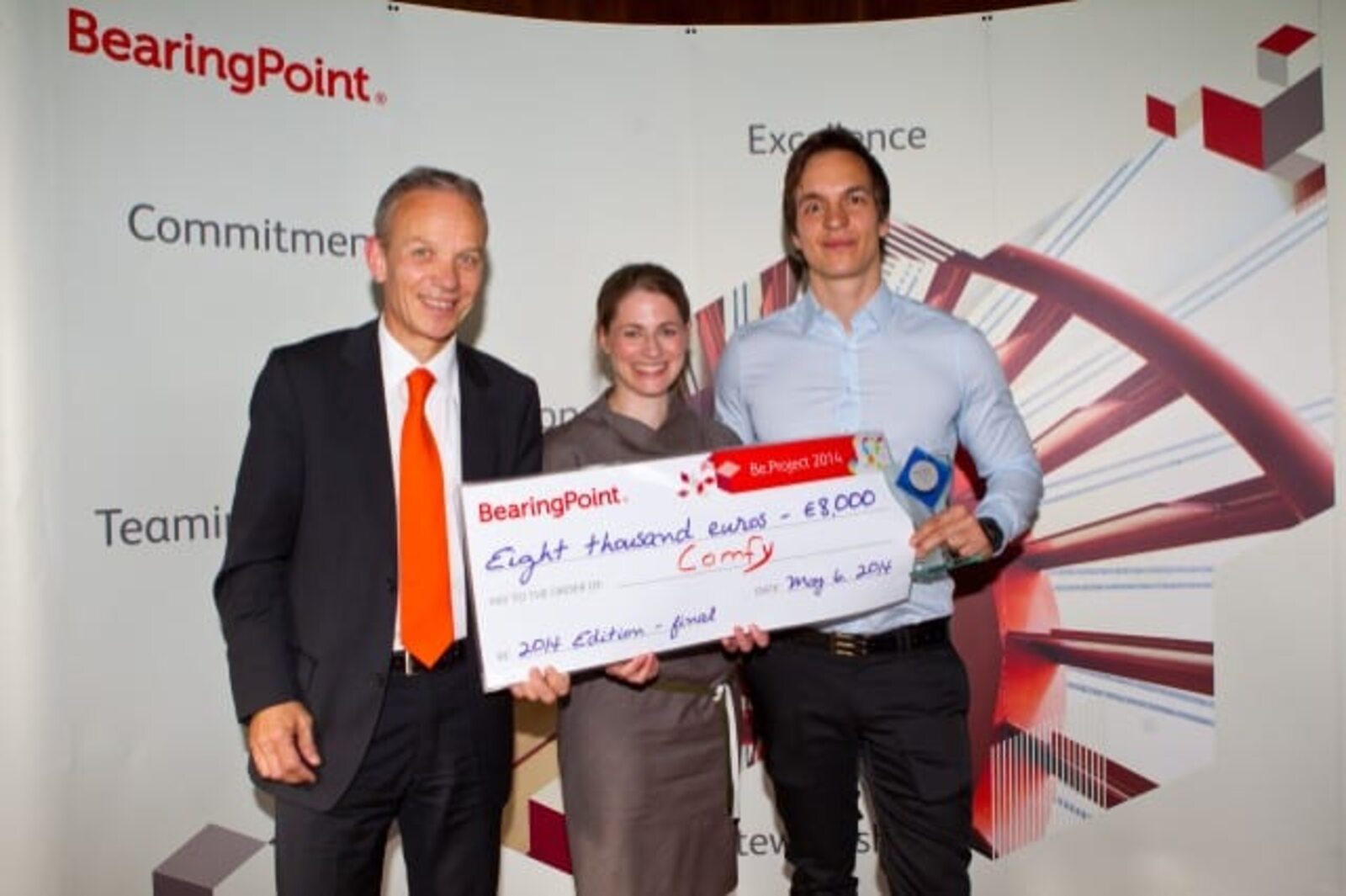 President of the Jury Marcel Nickler, Stefanie Turber, Marcus Köhler (from the left)

Here you can find the video of the interview.

They could convince the jury with a forward-looking solution of cleaning sewage water by enzymes, created by moss and hence to counteract pollution.

Because the demand for meat rises and our resources get shorter, they try to establish insects as a "tasty meal" for the people.

SmargeTech (Switzerland) - an invention that charges electric cars with the most environmentally friendly electricity. 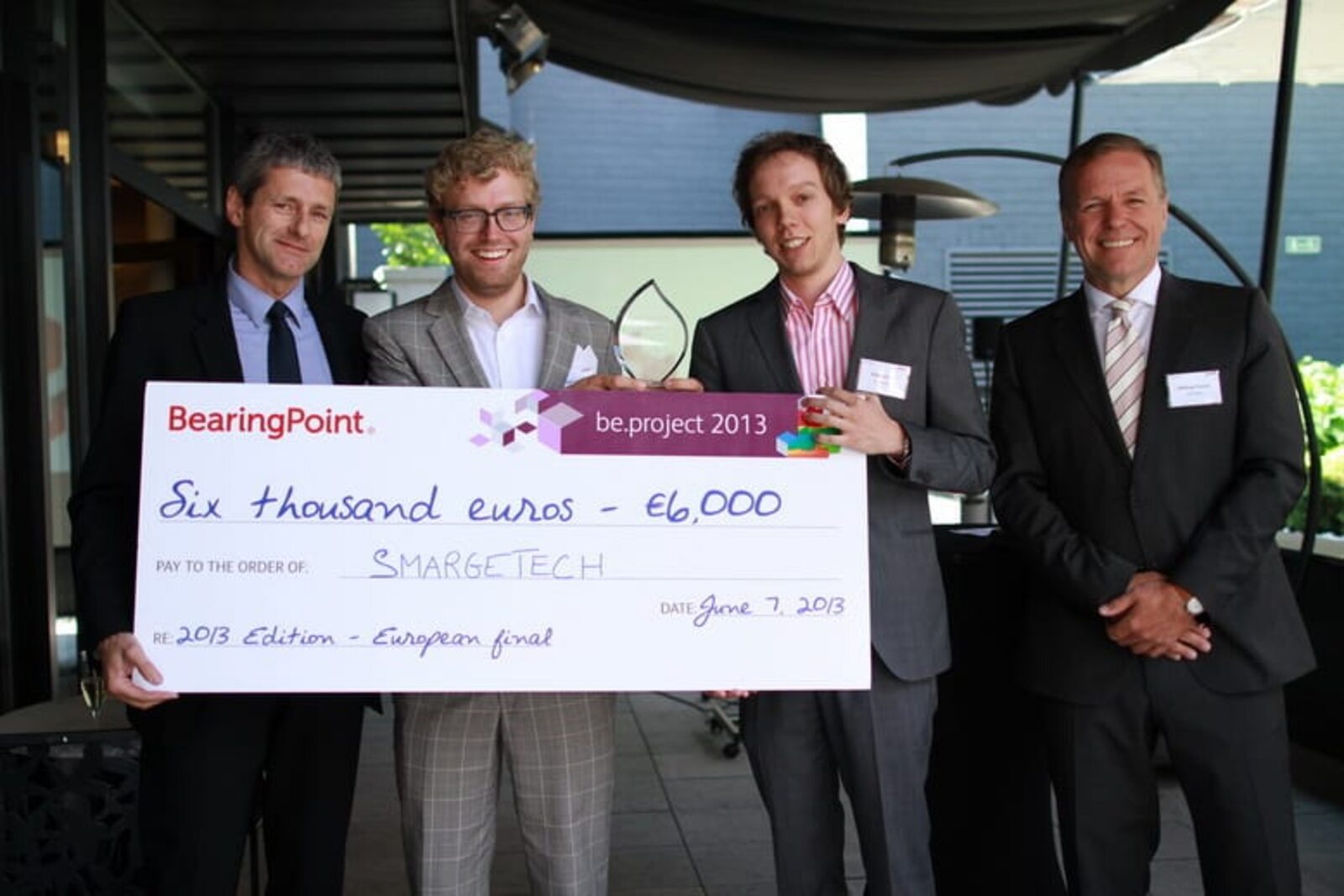 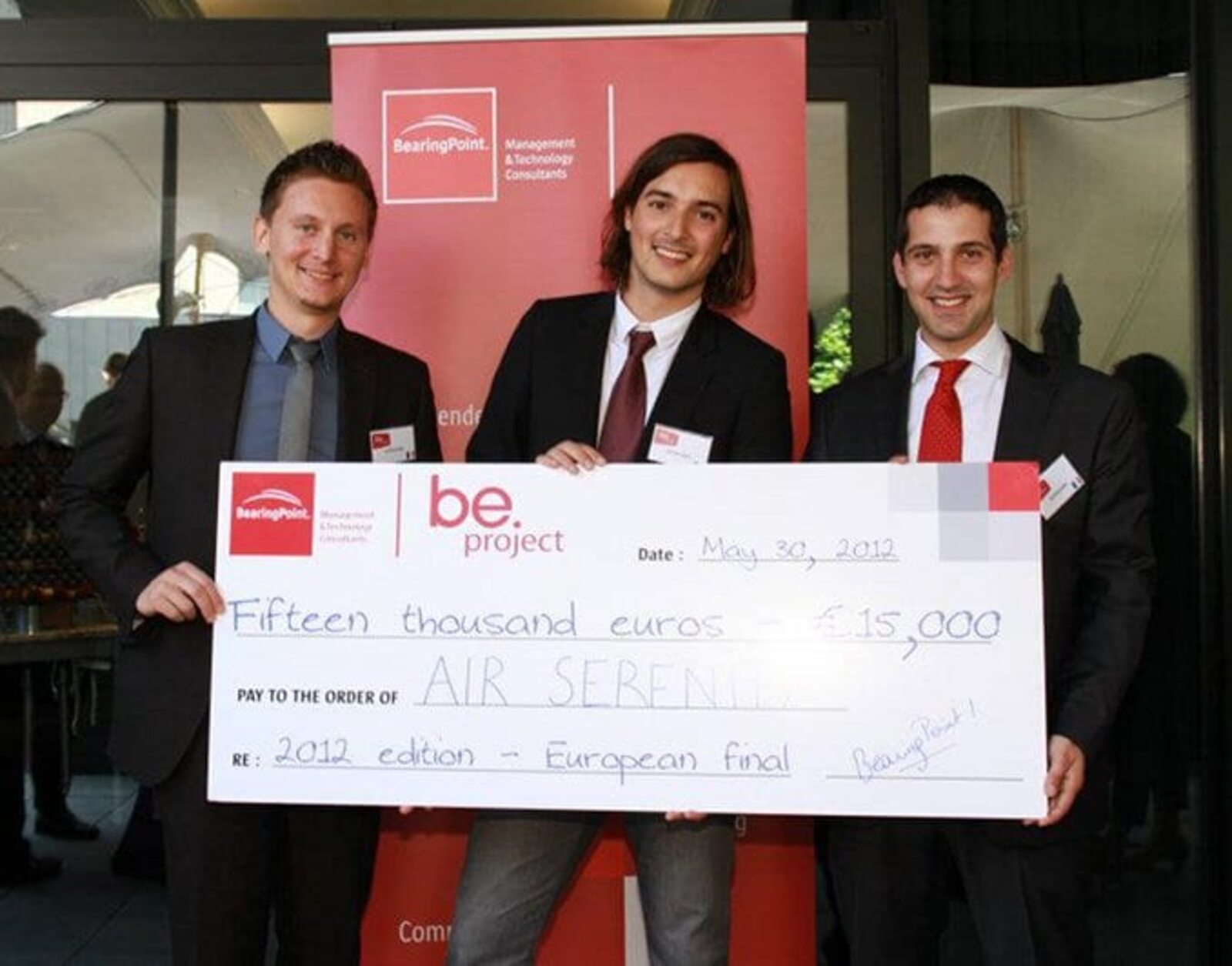 If you want to discover more