Since adopting the third Energy-Climate package in 2009, the European Union has launched an ambitious triple objective, the famous 20-20-20 pact: reducing green house gases (GHG), increasing the share of renewable energy in energy production, and reducing primary energy consumption, each by 20% before 2020.

Contrary to the first two – binding – objectives concerning greenhouse gases and renewable energy, the European Commission has ruled that the trajectory for the last – non-binding- objective to improve energy efficiency is insufficient and would run the risk of putting the 2020 target date into peril.

In order to facilitate reaching this last objective – or at least getting as close to the target as possible – a new Directive concerning energy efficiency was adopted by the European Parliament on 11 September 2012 and endorsed by the Council of Europe on the 4th October. 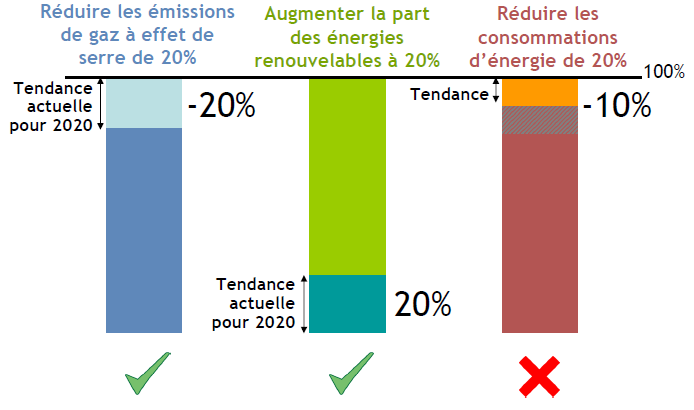 Within the framework of this Directive article 7 provides for the constitution of binding measures that will require all European Members to implement energy efficiency targets:

This type of mechanism was inspired by different schemes set up in several Member States, notably Great Britain (since 2002), Italy, Belgium (Flanders), Denmark and France where the Energy Economy Certificates scheme has been in application since 1st July 2006.

These binding mechanisms are all based on the same idea: increase public authorities’ actions by imposing obligations on the private sector that will produce larger sources of energy efficiency from their client bases (the “diffuse sector”). These mechanisms are accompanied by significant financial penalties if the objectives are not reached: for example, EDF (French Electricity Company) and GDF Suez (Gas company) had financial exposure amounting to €600M and €270M respectively for the first period of the Energy Economy Certificates (EEC) in France between 2006 and 2009 and the objectives for these companies have since been multiplied by almost 5.

The choice of implementation method, however, varies according to country, notably:

In order to take into account these varying approaches, the new Directive on energy efficiency tries to take a pragmatic approach and doesn’t outline a particular unified measure for the whole of Europe but simply fixes a common objective.

The Directive maintains a certain amount of flexibility in the way it calculates the annual objective of a reduction of 1.5% in final energy sales, on the condition that this calculation doesn’t effectively “reduce by more than 25% the volume of energy savings targeted”.

Member States can fix and take into account intermediate objectives (1% in 2014-2015 and 1.25% in 2016-2017), exclude energy sales to industries subject to green house gas emission quotas and include energy savings generated by cogeneration, and heat and cold network development or by improving energy efficiency in the framework of intelligent network deployment.

It also leaves Member States free to set up other energy savings policies as long as the final reduction target of 1.5% of total energy consumption is met:

The obligation mechanisms for energy saving have, however, proved efficient as energy policy instruments in States where they have been implemented. A study carried out by the European Commission in Great Britain shows that the British measures have generated nine times more energy savings than those that would have been generated simply by an equivalent rise in the cost of energy[i].

Besides, this kind of measure tends not to weigh much on the public purse as the brunt of the investments is borne by distributors and final clients. In Great Britain, the administrative costs of the Ofgem regulator in 2010 represented less than 0.1% of those borne by the obligated parties[i]. In France administrative costs have also been reduced with a national team of 10 project supervisors in charge of EEC (Energy Efficiency Certificates) at the end of 2012, while the obligated parties (EDF and GDF Suez mainly) spent €210 M during the first half of the period on structuring their offer, and the end user invested a total of € 2.6 billion in energy savings renovations.

Given these advantages (from the public authorities’ point of view), these binding mechanisms should become the preferred solution for European governments in response to this new Directive on Energy Efficiency.