We have been increasingly hearing, reading and talking about blockchain technology in the recent months, especially in the financial industry, where it is thought to become a game changer. It can provide additional efficiency and security, and may even completely disrupt the entire industry. Blockchain technology turns out to be of similar interest in the utilities business. Utilities and banks are alike in the way they are centralized, heavily regulated structures with complex processes. Utilities are a favorable environment for the deployment of blockchain technology.

Indeed, we are seeing growing numbers of pilot projects involving blockchain in the energy industry, some of them instigated by large companies such as RWE, startups like LO3 Energy and its experiment in Brooklyn, NYC, and even stock exchange operators such as the NASDAQ.

To understand these projects and what lies in the background, it is necessary to look at the basic concepts of blockchain, and how its characteristics provide assets for the transformations of the energy landscape.

What is blockchain and how does it work?

A blockchain is a distributed, secure and transparent system of record comprising a log of transactions shared across a digital network. Each node on the network contains a complete replica of the blockchain data. The nodes are held by “miners”. 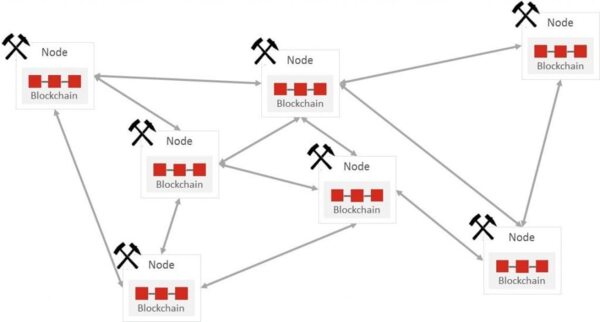 Figure 1 – Each node on the network contains a complete replica of the blockchain data. The nodes are held by “miners”

Miners are responsible for authenticating and validating transactions, and then create blocks to be added to the blockchain. 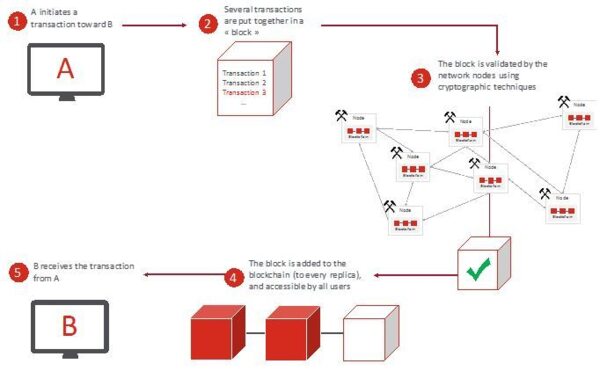 Figure 2 – A transaction on a blockchain

What are their main applications?

Blockchains are the first systems to overcome limitations of synchronizing databases, so that individuals and companies can store data and run applications with 100% reliability. The potential cost savings presented by a single global digitized ledger are significant.

This core functionality – decentralized database – can be beefed up by integrating mechanisms that make possible to carry out decentralized transactions between two or more users under specific conditions defined previously. This is what we call smart contracts. In this type of transaction, the terms of the contract are to be accepted previously by the users and the execution of the contract is then automatized. In a smart contract, rules are defined individually (quantity, price, quality) and thanks to blockchain technology, there is an autonomous matching between the parties, for instance between distributed providers and prospective customers.

An equally important benefit is that the ledger will produce a golden source of data: useful for business owners, auditors and regulators alike.

Blockchains have a wide range of applications, some already in use like in finance with the cryptocurrency bitcoin, others being just experiments or ideas as it is the case for most projects in the energy sector. The outlook is broad when we think of the possibilities of smart contracts in the energy sector. It represents a potential for secular change to the status quo, in which every player perceives an opportunity to play a new role in the global energy system. 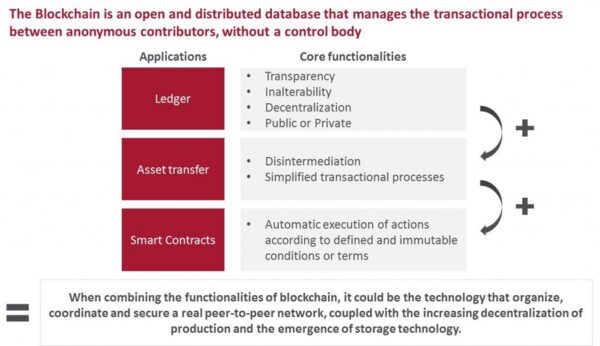 The ability of blockchain to enable a decentralized and autonomous grid can explain why blockchain technology caught the attention of all energy companies in the recent times.

2. Use cases of blockchain technology in the energy sector

After this introduction to blockchain, we can now analyze how it can be an answer to the current needs of the energy sector in the lights of the current changes it is going through.

One of the assets of blockchain technology is database management, which is transparent and cannot be violated. This asset could be used in systems that need certifications and traceability.

In France and several other European countries, Energy Saving Certificates or “White Certificates” are one of the main tools in their policies that aim for the reduction of energy consumption.

The idea is that energy producers, suppliers or distributors (electricity, gas, fuel, heat, cold …) are pushed to promote energy efficiency actions actively. An amount of obligations is defined in regulations over a specified period of time (obligations are distributed amongst producers according to their sales / energy deliverance). Each action indicating the amount of energy savings has to be described and filed, and can then be controlled by the authorities. At the end of the specified period, “obliged” producers have to justify the accomplishment of their obligations, or pay penalties otherwise. White certificates are tradable (For more details: http://www.developpement-durable.gouv.fr/-Certificats-d-economies-d-energie,188-.html)

This system is quite analogous to the concept of CO2 emissions trading. Other types of certificates are also now delivered to track the production and consumption of renewable and / or recovered energy (green electricity, biomethane, etc.).

These certificates are instruments supposed to guarantee a specified amount of energy savings, emission, or renewable energy consumption has been achieved. Each certificate has to be unique and traceable, guaranteeing that the impact of the related action has not been accounted for elsewhere.

In the future, registers could be managed via blockchains, requiring little action from the authorities whilst being accessible to all players in the Energy sector (the State, the public, producers, consumers, emitters, …), guaranteeing the uniqueness and traceability of certificates, and even managing the certificates’ trading (certificates’ markets). The benefit is for all players, since they would be able to concentrate on actions contributing to the energy transition.

There is no denying that there is still much to be done in the field since regulation weighs heavily on any innovation. Each country has its own national registers for the White Certificates, which meet different rules depending on the geographical location, which entails enormous costs for the utilities. For instance, if a utility has wind turbines in Belgium, solar panels in Wallonia, and biomass in Brussels, it must have 3 different national White Certificates management registers, and as many dedicated teams and therefore the costs rocket. Blockchain would here be a perfect example of application to disintermediate all these actors, and thus reduce the risk and the costs, except that the main actor is the State, and therefore this implies to change the regulation first.

The stock exchange operator, Nasdaq, unveiled in May 2016 a service that lets solar power generators sell certificates thanks to its Linq blockchain service (for more details: http://ir.nasdaq.com/releasedetail.cfm?ReleaseID=948326).

In this system, the solar panels have to be connected to the Internet with technology provided by Filament, a Nevada-based blockchain start-up. Through an API pull from NASDAQ’s blockchain-based private markets platform Linq, anonymous certificates are created and can be sold to anyone who wishes to subsidize solar energy. The solar panels are hard-wired into the IoT device through a converter which enables Linq to measure the wattage they’re putting out and producing into the grid. 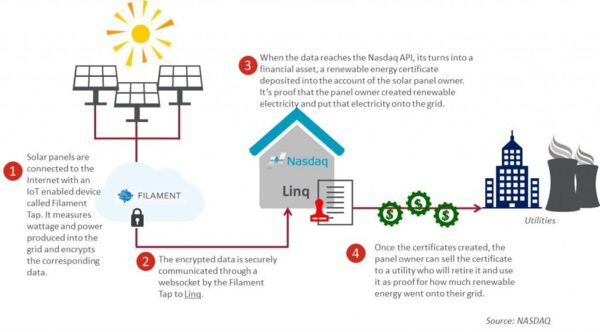 The electricity smart meter is the keystone between suppliers and customers of the smart grid, and concentrates all the transaction, confidence and security stakes associated with an ever more intelligent and flexible energy.

Smart meters associated with the transparency of blockchain create an environment where transactions are open and secure:

A smart grid network supported by blockchain technology would ensure an efficient local relationship between production and consumption of renewable energy. Participants could publicly track their energy usage and production, and sell any unused energy to other participants. They would also have the ability to reduce their energy bills by making more informed purchasing decisions, avoiding consumption peaks or switching into a lower subscription. Smart meters and blockchain technology would ensure a simplified billing process (efficiency, transparency) and faster switching times.

A blockchain solution identifying where the energy is coming from, at what unit price and any mark-up passed to the consumer would result in more competitive pricing and in better integrity from public perception.

RWE and Slock.it are putting together a decentralized billing system for electric vehicle charging. It is called BlockCharge. Following the same principle that roaming for telecommunications, it would allow electric vehicles to charge anywhere (with the help of a smart plug), and to be billed for the electricity they used in a simple, common, and blockchain-based way. The EVs would interact automatically with stations and the electricity payment process would be autonomous.

The benefits of the project:

Blockchain may help the emergence of microsystems based on prosumers

In the energy sector, we are witnessing the development of prosumer characters that is to say individual consumers that are also producing energy (homes with solar panels for instance).

In that respect, blockchain technology represents an opportunity for a wider development of those behaviors by increasing the number of people who could buy and sell energy directly with a high degree of autonomy.

Indeed, as said in the previous paragraph, blockchain technology should entail major changes since it allows transactions to be carried out directly from peer to peer. No third party intermediaries are required. In theory, we can imagine a market place where consumers exchange their own production without needing energy companies to organize the transactions. It creates a shift from centralized structures (banks, trading platforms, energy companies) towards a decentralized system (peer-to-peer transactions). It would reduce cost and speed up processes. The system would thus become more flexible. Of course, in that model, energy companies are still needed to organize the transfer of energy.

From theory to reality: the emblematic experimentation in Brooklyn

Transactive Grid, the project of the LO3 platform and ConsenSys, has become a quite famous example of the possible application of blockchain to energy with its pilot experiment in Brooklyn, NYC (for more details: www.brooklynmicrogrid.com). Five “producer” houses, equipped with solar panels, sell their production to five “consumer” houses, on the other side of the street since April 2016.  The objective of the experiment lies in the re-appropriation by citizens of their energy production, by the establishment of mini-grids, that is to say, mini autonomous energy communities. For this purpose, sensors record the history of the energy generation at a specific point, and immediately record it on blockchain Ethereum. Smart contracts can then govern the rules of use of this energy, and of course the tariffs of producers. 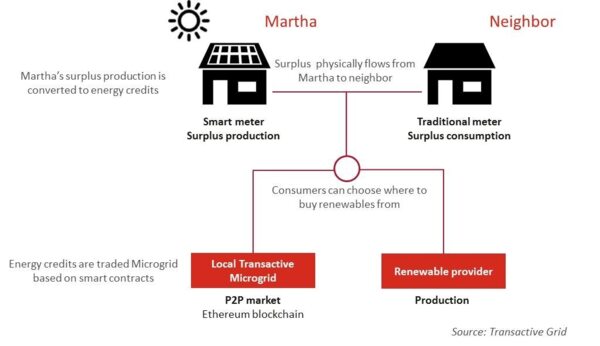 We could thus imagine, like the microgrid in Brooklyn, a proliferation of local decentralized and autonomous microgrids. In local communities, single persons with a single solar panel could thus participate in the end user market. Moreover, we can easily conceive a system where people with individual solar panel no longer feed their excess energy into the grid but market all their production.

List of potential use cases and associated examples. This list is not exhaustive, as blockchain technology makes it possible to increase efficiency in processes and improve transparency, so it can be considered in numerous applications. Its use will depend on its adoption by the greater mass. At this stage, all projects remain pilots to validate the public interest.

Figure 7 – Potential use case and examples

None of the energy companies currently developing blockchain applications have moved beyond the concept or pilot stage yet. It appears that those models are difficult to put into practice. Indeed, the actual technology lacks of maturity and is complex in its development and implementation, in the energy sector in particular. 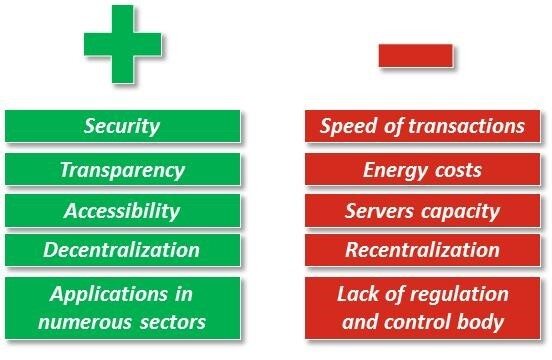 However, France is a pioneer in this field, which is encouraging for the development of blockchain technology. Indeed, in July 2016 the CRE enacted an ordinance on the self-consumption and the pooling of the energy which allows anyone to produce electricity and sell surplus production to others (neighbors for example). It thus authorizes a collective self-consumption which would respond to a local electrical demand through a local electrical supply. On December 21, a bill ratifying these ordinances was adopted.

The development of these models is very promising. Blockchain technology is a potential game changer for the energy market and its ecosystem: users, real estate companies, municipalities.

Nevertheless, it is too early to know what role in energy markets blockchain technology is set to play. It may be restricted to database management and transactions processing, but most likely, some wider and more disruptive future awaits.