We previously outlined steps that natural gas utilities can take to plan for a hydrogen future. The new hydrogen economy will bring sizable and multiple investment opportunities along the entire value chain, from production through transportation, storage, and end use.

With a $15 trillion investment between now and 2050, hydrogen has the potential to provide up to 15-20% of the world’s energy. This transition offers significant investment opportunities and requires natural gas utilities to consider the following:

Moving toward a decarbonized economy with a potential sizable role for hydrogen will require detailed market-sizing of potential capital requirements. Developing comprehensive estimates based on key assumptions for each part of the prioritized hydrogen value chain is critical. For example, there are several key areas to consider when estimating capital needs for transportation, such as the number and capacity of tub trailers required to transport a percentage of hydrogen to meet demand, estimated miles of transportation and distribution (T&D) pipelines (including number of compressors) required to connect to production and demand centers, and number of injection sites required. There are several detailed assumptions to consider for each. The figure below is an illustrative example of the types of detailed assumptions that must be considered when estimating the capital investment for transportation. Each part of the hydrogen value chain will require its own set of assumptions. 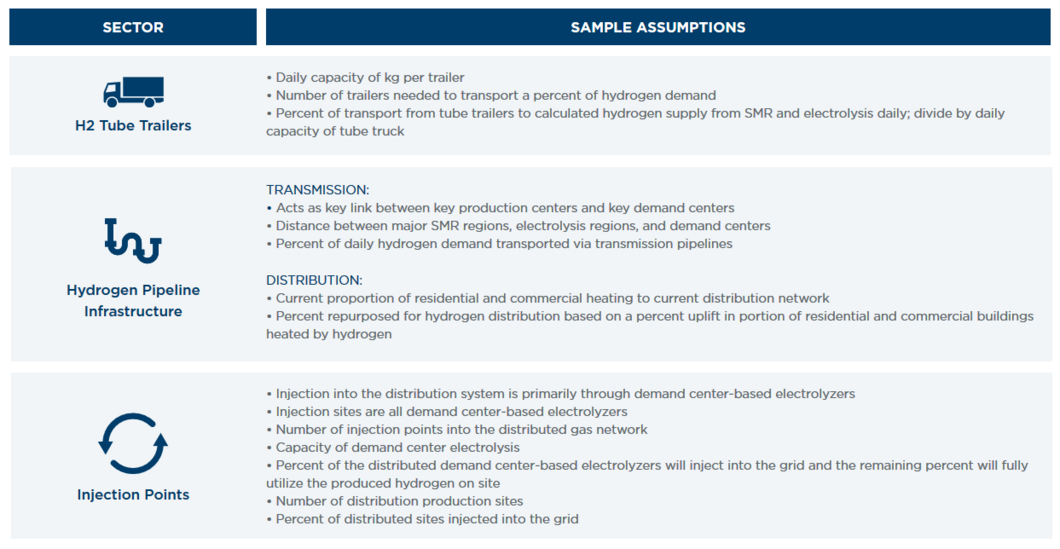 Once the right assumptions are in place for each part of the hydrogen value chain, scenarios—informed by global and U.S. studies—should be defined to provide insight into how changing end-user demand could influence investment returns. The scenarios help to refine investment planning by updating capital value ranges and potential market share by capital investment opportunity. This, in turn, will help define and prioritize future paths to achieve proposed carbon-reduction targets. The figure below illustrates some of the individual scenarios that can be developed to help refine investment plans.

Analyzing influencers is key in obtaining acceptance of hydrogen

As many states move toward decarbonization, natural gas utilities should understand where federal and state government agencies and other key influencers, including environmental groups and industry associations, stand on hydrogen’s role in overcoming potential challenges and win customer acceptance.

Significant support across these influencers will be required, and natural gas utilities will need an aligned approach to garner acceptance and help level the playing field for hydrogen. Hydrogen represents a key pathway toward decarbonization, especially in areas that are difficult to electrify, and key influencers can enable the development of hydrogen as a component of a broader solution.

The main federal agencies with the ability to influence the adoption and proliferation of hydrogen are the Department of Energy (DOE), Federal Energy Regulatory Commission (FERC), Pipeline & Hazardous Materials Safety Administration (PHMSA), and the Environmental Protection Agency (EPA). The DOE, for instance, has facilitated the growth of hydrogen as a source of energy through its Hydrogen Program Plan and will likely continue to play a role in development and testing of new hydrogen technologies.

In Texas, a $10.8 million H2@Scale demonstration is supported by the DOE’s Hydrogen and Fuel Cell Technologies Office and is the country’s first dedicated renewable hydrogen network to test the safety and reliability of hydrogen and assess how the expanded production and use of hydrogen could enable grid resiliency. It also will encompass the design, build and operation, integrating commercial hydrogen production, distribution, and storage with solar- and wind-powered electrolysis. Further, the DOE recently announced the Hydrogen Shot within the Energy Earthshots program to accelerate breakthroughs in clean energy solutions and establishes a framework for clean hydrogen in the infrastructure-focused American Jobs Plan, with a goal to reduce the costs of hydrogen by 80% to $1 per kilogram by 2030. The DOE’s overall fiscal year 2022 budget requests $400 million for hydrogen-related efforts to help advance progress to meet Hydrogen Shot goals.

PHMSA operates within the Department of Transportation (DOT) and currently regulates over 700 miles of hydrogen pipeline through 49 CFR Part 192, most of which serve industrial demand. Additionally, PHMSA provides research and development to support activities to ensure that hydrogen is transported safely, which is important for hydrogen’s future as a key component of a decarbonization. Utilities can drive investment into a hydrogen economy, with PHMSA providing research, development, and testing of current materials, engineering designs and systems, and evaluation activities that are required to support industry standards for the transport of hydrogen by pipeline.

The U.S. Energy Information Administration (EIA) Annual Energy Outlook 2021 does not reference hydrogen for production, capacity, or consumption projections. As a result, natural gas utilities will need to consider the role and perspective of these agencies and understand how each can and is supporting the growth of hydrogen along the value chain.

Additionally, natural gas utilities will need to gauge the level of favorability toward hydrogen and the level of engagement required to advance a hydrogen agenda. In California, for example, the main state agencies are California ISO, California Air Resources Board (CARB), California Public Utilities Commission (CPUC), and California Energy Commission (CEC). The figure below illustrates the landscape regarding natural gas utilities to explain each agency’s level of favorability toward hydrogen.

How these key influencers are evaluating demonstrations and dictating policy is a key indicator of their degree of favorability. For instance, the CPUC is assessing a hydrogen-blending demonstration program filed by state natural gas utilities that could set the statewide hydrogen-injection standard and help identify the types of upgrades needed to existing natural gas infrastructure and operational limits of the pipeline system. A decision from the CPUC is expected soon; however, the CPUC did raise concerns that the initial proposal lacked a clear scope, timing, and estimate of, with the potential to be passed on to customers. Additionally, the CEC recently indicated a preference for incentivizing electric heat pumps rather than implementing a ban on natural gas in its building code update. A vote is expected in August with inclusion into the building code in 2023, at the earliest. While CARB has identified hydrogen-powered fuel cell electric vehicles as a significant driver in reducing California’s greenhouse gas emissions, it has identified a limited role for hydrogen in its scenarios.

In New York, the Climate Action Council has been assigned the task of determining how hydrogen should be treated and if it should receive additional state funding to support its use. While the council is in the early stages of assessing green hydrogen and other technologies, the state is encouraging private sector investments in hydrogen. For instance, National Grid USA and Standard Hydrogen are planning a green hydrogen storage and delivery pilot project, in which renewable electric power is purchased to operate an electrolyzer creating green hydrogen, which would then be stored and distributed. However, much like in California, this demonstration is still pending New York State Public Service Commission approval. As state agencies evaluate demonstrations, pilots, and other hydrogen-focused initiatives, natural gas utilities will need to document and assess each state agency’s level of favorability has toward hydrogen.

In addition to federal and state agencies, natural gas utilities must evaluate the level of hydrogen favorability of environmental groups and industry associations, such as the American Gas Association (AGA) and the American Clean Power Association. Current AGA Chair David Anderson has stated that the AGA’s first order of business is to determine hydrogen’s compatibility with distribution systems and establishing safe blending levels. The American Clean Power Association has endorsed the recently introduced SB1017, the Clean Hydrogen Production Incentives Act of 2021, which allows for up to a $3/kg tax credit to produce clean hydrogen using electricity produced from renewable energy resources (e.g., wind, solar, geothermal, nuclear energy). In New York, Danskammer Energy and NRG are awaiting state approval to replace their existing plants with low-emission, natural gas-powered plants that could potentially run on green hydrogen to align with the Climate Leadership and Community Protection Act (CLCPA) mandates. However, several environmental groups are hesitant to support any new gas plants and have noted that hydrogen is still far from becoming a viable source of electricity.

This Article is written by our Partners Westmonroe.
Link to their complete Point Of View on the Subject.