Tunisia, an emerging country in North Africa, is historically presenting an energy mix mainly based of gas (part of it is locally produced or imported from Algeria, a cross-border country).The decrease of its domestic fossil energy production and the recent COP 21 commitments have pushed the country to review its energy strategy for the next 20 years.

This article starts with making an overview of the key issues and challenges that the Tunisian government is facing. Then explores the different alternatives that could improve the energy independence and focuses on renewables.

Today Tunisia is facing a huge energy deficit which has reached 4 Mtep in 2015 and which is caused by two main phenomena:

i. The energy consumption has nearly doubled within 20 years between 1992 and 2012 due to the economic growth and the increase of the electrification rate (100 % in 2012).

The indicators bellow summarize the energy balance in Tunisia. 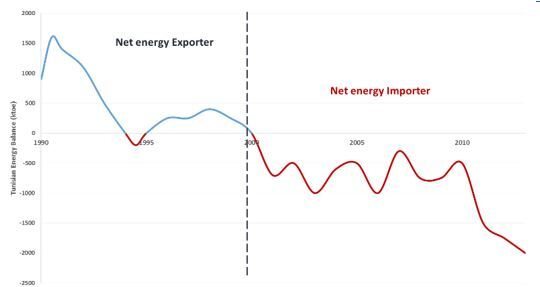 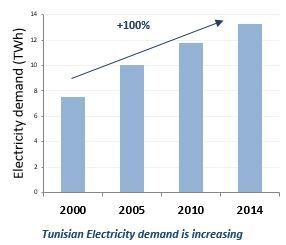 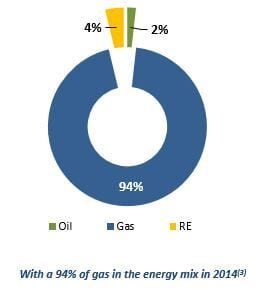 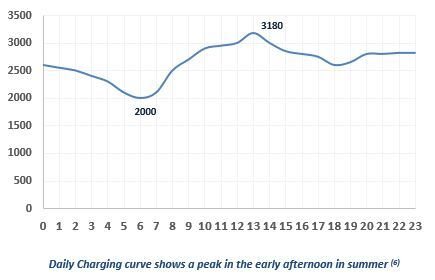 2. Analysis of the current situation (SWOT)

Today Tunisia is aiming to find new options to meet its future energy needs as the domestic production of gas is expected to start declining by 2020 while the demand will still be increasing. Thanks to its high renewables’ potential and geographical location, Tunisian government has decided to strengthen its strategy in this area (10).

The SWOT matrix below sums up the Tunisian energy situation. 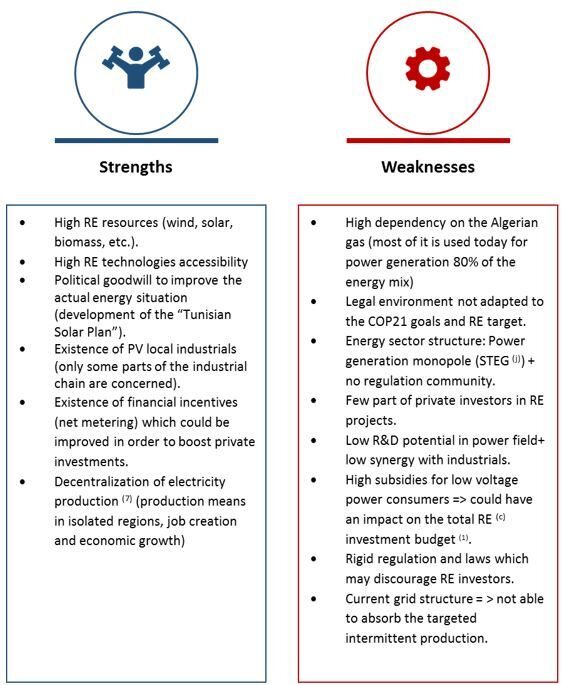 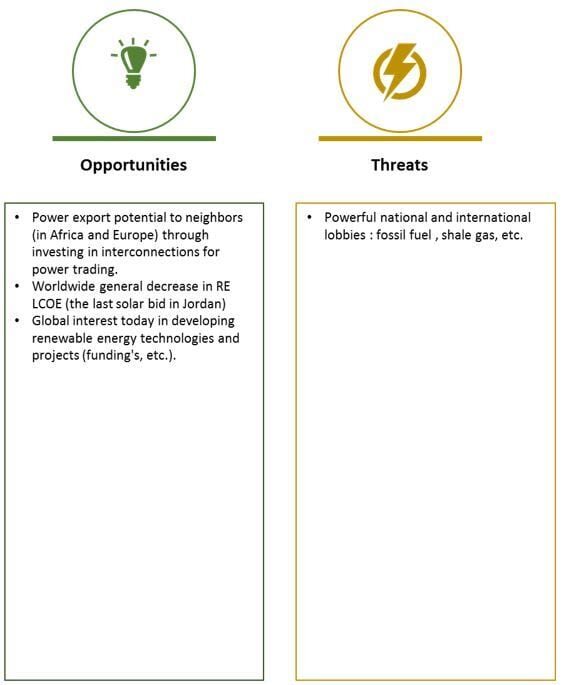 3. To face the challenge , many alternatives are on the panel

The challenge for the Tunisian government today is to reconsider the energy strategy and the national policies in order to:

While considering several alternatives energy sources such as:

4. Current strategy is to focus first on renewable potential

Since 2000 Tunisian government has been working in priority on 2 main axes to secure power supply:  energy efficiency and energy mix diversification.
With a targeted share of RE of 30% by 2030, a specific plan was set in order to boost the investments in this field.

The graph below shows the targeted installed RE capacity by 2030. 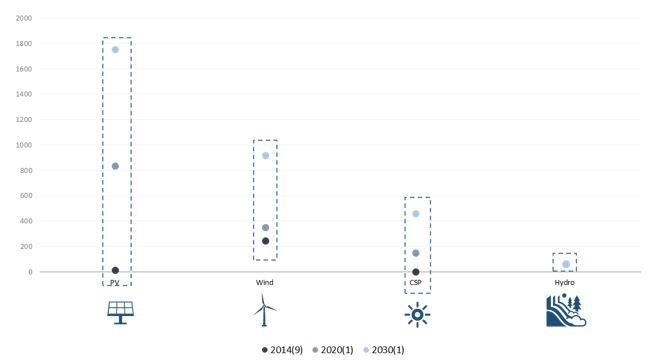 According to our internal study and the report co-written by UNDP(h) and the National Agency for Energy Management entitled “Tunisia: de-risking the renewable energy”(12), many risks could be identified within the renewable energy sector in Tunisia. The report has proven that derisking the sector is essential in order to decrease the RE LCOE. A PESTEL (i) matrix summarizes the main risks as well as actions made. 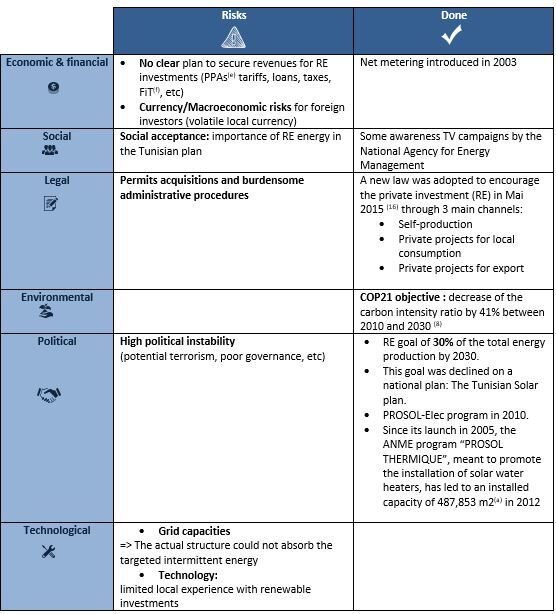 Reducing these risks implies at first approach to decrease the cost of equity and thus the respective LCOE (g). For instance, according to the same report, “with derisking measures wind LCOE falls from 7.5 to 5.8 c€/kWh and 9.9 to 7.7 c€/kWh for solar power” (12).

In order to reach its 2030 RE goals, mid-term Tunisian strategy should focus on derisking the sector and encouraging investments.

Tunisia in the Maghreb market

Tunisia has adopted renewable energy so as to cope with the increasing energy deficit while focusing on local solutions (development of private sector, domestic PV production). Government is currently working on its national policies in order to encourage private investments in RE. The Tunisian Solar Plan, for instance, is based on IPPs at a level of 70% (of a total of 2700 M€ and 40 projects) (13).

In a more global context and thanks to its geographical location, Tunisia could beneficiate also from cross boarder interconnections (North African neighbors and Italy). Partnerships could be developed in this context in order to boost foreign investments.