In addition to showcasing the world’s best athletic talent, the Tokyo Olympic Games demonstrated hydrogen’s potential to the world. Hydrogen generated from solar power supplements the propane burned in the Olympic cauldron and there are more than 500 fuel cell vehicles and 100 fuel cell buses to shuttle passengers around the games, with 35 hydrogen stations providing fuel.

Given broad global decarbonization efforts and hydrogen’s expected role in those efforts, utilities can be active players in legislative and regulatory considerations in place today that must be addressed to support—or at least not inhibit—hydrogen research and infrastructure investments, including potential funding mechanisms.

Considerations for legislative and regulatory initiatives

Many state legislative bills and regulatory policies do not address hydrogen production, transportation, storage, or end-use in any meaningful way. Natural gas utilities must understand both the legislative and regulatory landscape and help identify where new bills, amendments to laws, and regulatory changes could help support hydrogen. Natural gas utilities also need to appreciate and address the specific exceptions language within any proposal and support legislation and policies that see a role for hydrogen as part of decarbonization. This means working closely with lawmakers, regulators, customers, and other stakeholders to amend or develop new statutory or regulatory requirements.

Here are some considerations for sharing information and data to advance current thinking around the potential role for hydrogen in a clean energy economy :

With the Biden administration’s funding for 15 hydrogen demonstration projects in the American Jobs Plan, many states are introducing hydrogen-focused legislation and policies or amending current law to include hydrogen. These changes generally have focused on creating hydrogen-specific incentive programs, updating renewable portfolio standards, and refining zero-emission transportation standards.

Natural gas utilities can advocate for the creation or amendment of statewide incentives programs to increase demand for hydrogen as a fuel. In New York, for example, SB S3281 was recently introduced as an amendment to the CLCPA to create a credit for hydrogen produced in the state similar to a renewable energy credit. Natural gas utilities in New York and other states with comprehensive zero-emissions laws could work closely with legislators to identify areas within the law that can be amended to ensure that hydrogen has a place in each state’s decarbonized future and help integrate hydrogen into clean energy roadmaps and policies.

To provide an international perspective, there are several hydrogen production, transport, and end-use application pilot projects that have received funding. In Australia, funding has come from national and regional governments, while United Kingdom pilots have won support through the Network Innovation Competition (NIC) run by the regulator under the RIIO framework (Revenue = Incentives + Innovation + Outputs) and through some innovation funds. With the exception of the NIC funding, which allows costs for these projects to be spread and recovered across distribution utilities, support has come mostly through grants and finance access. No long-term cost-recovery mechanism has been established; however, support for hydrogen under the Contract for Difference scheme is being considered in the UK. Natural Resources Canada has been engaging with stakeholder groups, to develop a strategy to become net-zero by 2050 and position Canada as a world-leading producer, user, and exporter of clean hydrogens. And in March, the Canadian Gas Association (CGA) announced the launch of NGIF Capital Corporation, a venture capital firm created by and for Canada’s natural gas sector offering grant and equity financing to early-stage startups developing solutions to support Canada’s environmental goals, including an investment focus across the hydrogen value chain. Its flagship fund has received $12.1 million in approved funding with 12 corporate investors.

In New York, pending legislation would require that every new car, truck, and medium-duty and heavy-duty vehicle sold or leased in the state produce zero emissions by 2035. The bill would mandate state agencies develop rules and regulations to promote the use of zero-emission vehicles. This provides an opportunity for natural gas utilities to work with the state’s Public Service Commission and other influencers to advocate for hydrogen as a potential solution as they accelerate the availability of affordable fueling and charging options for zero-emission vehicles. Conversely, SB 662 in California explicitly identifies hydrogen as a zero-emission solution for vehicles, but would require the CPUC to evaluate and promote policies to develop equipment and infrastructure including pipelines, distribution, and make-ready infrastructure using a cost recovery mechanism to facilitate the fuel’s use in low-emission vehicles.

California’s Renewables Portfolio Standard program has been amended multiple times since 2002 to require all the state’s electricity be generated from carbon-free resources by 2045. As per the standard, there is a place for hydrogen, as a facility converting hydrogen gas to electricity in a fuel cell may qualify for RPS certification if the hydrogen was derived from a non-fossil-based fuel through a process powered using an eligible renewable resource. New York’s Clean Energy Standard (CES) was recently expanded and approved by the state Public Service Commission based on proposals from the New York State Energy Research and Development Authority (NYSERDA) and the Department of Public Service (DPS) to identify a regulatory roadmap to address requirements in the CLCPA; however, the updates do not specifically document hydrogen as a solution.

As states amend their renewable standards, natural gas utilities should advocate explicitly that hydrogen be part of the mix to hit emissions. The utilities could benefit if current statutes are amended to ensure that producing green hydrogen and carbon-captured hydrogen is part of any carbon-free requirement. In addition, natural gas utilities should continue to promote hydrogen through alliances and partnerships with entities such as renewable energy developers, particularly where their assets are near utility natural gas assets. For instance, locating offshore electrolyzers alongside offshore wind should be considered, especially in New England and off the coasts of New York and New Jersey where there are aggressive wind mandates.

It could be several years before many of these legislative and regulatory policy proposals and changes are approved, which means it is critical to develop a priority list and a roadmap that extends three to five years to outline required changes, dependencies, proposed sequencing, and timing. 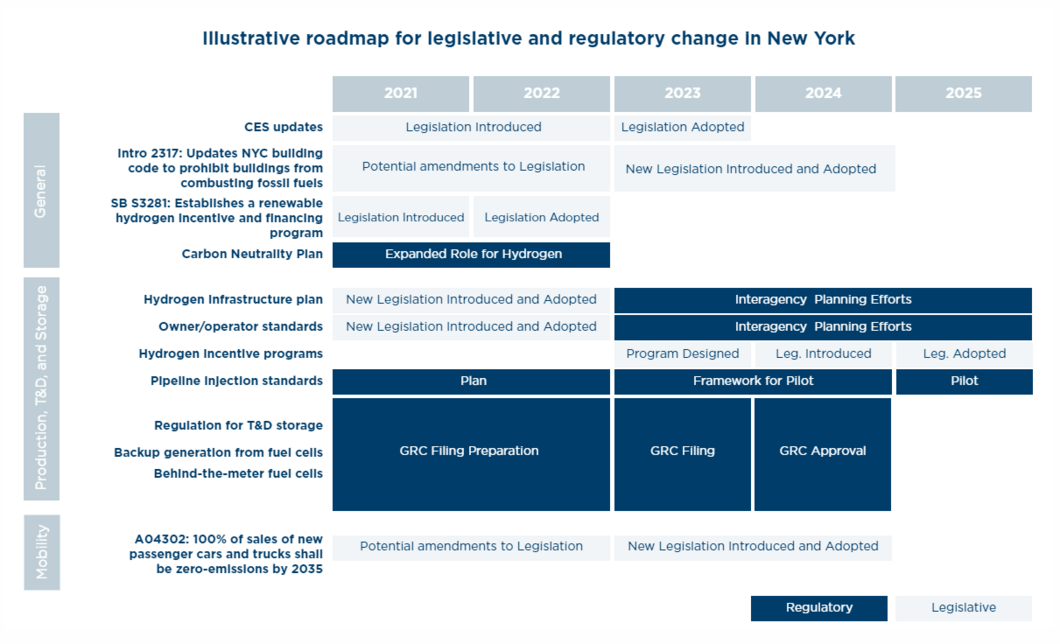 Country-specific strategies are underway globally to identify hydrogen’s role in decarbonizing heat, transport, and industry, and to promote actions required to enable the transition to a hydrogen economy. While the U.S. is still in the early stages of development, there has been recent advancement with more hydrogen demonstrations, pilots, and bills, especially with the Biden Administrations’ push to reach net-zero emissions economy-wide by 2050 and the proposed American Jobs Plan. Important synergies exist between hydrogen and renewable energy. Hydrogen can substantially increase the renewable electricity market growth potentials and broaden the reach of renewable solutions. Electrolyzers can add demand-side flexibility and hydrogen can be used for seasonal energy storage. Low-cost hydrogen is the precondition for putting these synergies into practice and to reach net-zero emissions goals. Natural gas utilities can help to continue to shift the focus by :

Some government officials are already inviting input from utilities. Some regulators are encouraging utilities to work with standards organizations and regulators to help accelerate and align with new standards and regulations. Further, other parties impacted by decarbonization proposals are moving to influence statutory and regulatory outcomes. Natural gas utilities must make sure their voices are also heard.

This Article is written by our Partners Westmonroe.

Link to their complete Point Of View on the Subject.