Capturing and measuring what it means to innovate has long been the dream of social scientists, albeit as elusive as the search for the Holy Grail. Many would regard this undertaking as impossible – after all, innovation consists of a steady stream of new developments. How does one measure something without precedent, the shape of which is just emerging and which lacks identity or clarity?

While no one uses quite the same terms, the structure remains similar, and it is here that answers lie

Many have tried to define innovation over the years. Already we have a problem, in that every formulation differs from every other – no innovation expert dares to agree with anyone else! If we look closely at these descriptions a remarkable pattern emerges, however. While no one uses quite the same terms, the structure remains similar, and it is here that answers lie – as we can see from philosophers and thinkers across history.

The origins of innovation and creativity thinking

Perhaps the first recorded insights on the nature of innovation can be seen in the plays of ancient Greece, where innovation is spurred on by the mingling of comedy and tragedy, the first element laughing with you out of folly, the second evoking anguish and tears. But all this is play. You suffer no physical harm and are warned, through the plays, to mend your ways in good time.

This coming together of playful thinking and hard reality can be seen with Archimedes, who was famously invited to determine whether a crown given to the king was made from pure silver or adulterated with base metals. He knew the weight of silver but not the volume of the crown. Frustrated, he escaped from his laboratory and took a bath. When the water rose around the tub he saw the solution (note 1).

Arthur Koestler, the 20th-century thinker, considered creativity to be the ‘bisociation’ (note 2) of two very different frames of reference, such as ‘Is the King’s new crown made of real silver?’ and ‘It is time I took a bath?’ Koestler saw creativity as the combination of two or more matrices of thought. For example, Gutenberg’s printing press was a combination of a winepress, a coin mould and wooden blocks inked to create playing cards. He had observed all three undertake ‘a simple substitution. God hath revealed to me the miracle.’

Carl Jung also believed creativity to be an encounter between the conscious mind and the archetypes of ‘collective unconscious’ (note 3). What do all these views on innovation tell us? What is the unmistakable pattern running through them all? They all take the form of dilemmas or paradoxes. For example, Greek theatre is real about the human condition, but unreal in the sense of pretending. Jung would have us explore ancient archetypes with a new conscious awareness.

Should innovation be left to chance?

According to many thinkers, the human brain has evolved to provide a balance between one such dilemma – that is, structured reason and intuitive leaps of faith. As psychologist Robert E Ornstein explains, the ‘left brain’ is linear, rational and analytic, and thinks in bits and pieces. The ‘right brain’ is intuitive, connective and holistic, and thinks in patterns and fields (note 4). People are at their most innovative when they solve problems by using the two hemispheres working in harmony.

Others, such as Edward de Bono, have explained this dilemma in terms of ‘vertical’ and ‘lateral thinking’ (note 5). Straight-line thinking is vertical, logical and rational, but largely sterile. Innovation comes from lateral connections between straight-line thought processes – like joining two vertical mineshafts. For example, what would you do if your car lock is frozen and a cold wind blows your matches out? You would take shelter from the wind, heat your key, and insert it into the lock.

In other words, innovation involves the reconciliation of opposite and highly contrasting values. Innovation can be symbolised and elicited by metaphors, since these are like yet unlike what they resemble, making the strange familiar and the familiar strange, according to William J J Gordon (note 6). If you can somehow wrestle two conflicting ideas into a novel synthesis, you are there. 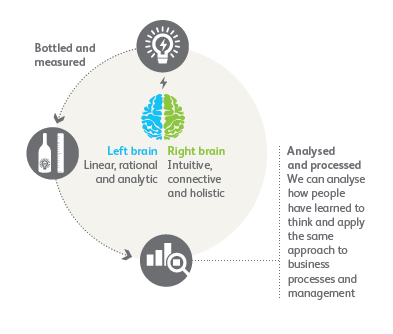 So, is innovation simply a case of living life in the physical world and hoping for happy accidents, triggered by unconscious events? Not according to educationalists J W Getzels and P W Jackson, who believe we must think divergently, to multiply our options and admit all conceivable information, and then converge on a better solution, using two or more of the ideas dredged up (note 7).

Archimedes was too absorbed in his problem to be able to solve it, but when he took a bath, the water rose around his body and – Eureka! – he could immerse the crown in water, too. ‘Focus’ was juxtaposed with ‘relaxation’, ‘work’ with ‘rest’, and ‘conscious’ with ‘unconscious’. His thinking diverged sufficiently to admit the bathtub into his calculations.

In my experience when teaching innovation, entrepreneurship and problem-solving techniques with companies all over the world, I have found to my delight and surprise that, once people in a company or classroom have learned to reconcile the opposed values presented by dilemmas, they will tend to reconcile most or all of the values that confront them, regardless of content, although some particularly vexatious dilemmas may defeat them.

For example, I taught entrepreneurship to a class in Singapore with some colleagues. We then invited them to tell us whether or not the course had helped them to reconcile ‘rules’ with ‘exceptions’, ‘individuals’ with ‘communities’, ‘bottom-up participation’ with ‘top-down instruction’, ‘one discipline’ with a ‘different one’, ‘work’ with ‘play’, ‘analysis’ with ‘synthesis’, ‘diversity’ with ‘inclusion’, ‘excellence’ with ‘equality’, ‘competition’ with ‘cooperation’ and so on.

If students reconciled at least two of these pairs they would tend to reconcile nearly all of them, even where the course had neither touched on these issues and not instructed them on how to answer. In other words, once people have learned to think about a specific problem space with both sides of their brains, they can then apply the same approach to completely new problem spaces.

So, people have an inherent ability to think both horizontally and vertically to deal with quite complex problems. However, few organisations have the luxury of taking the equivalent of a bath whenever they are faced with a complex problem. Innovation can be extremely expensive if it is left to take its own course, particularly as it may not be obvious when it is achieved. As Louis Pasteur said in an 1854 lecture, ‘In the field of observation, chance favours only the prepared mind.’ In other words, unless you know what you are looking for, a happy accident will not be recognised as such.

If you can find cheap ways of simulating reality, therefore, you can deliver on your innovation goals more quickly. For example, business guru Michael Schrage sees ‘serious play’ as delivering the essence of innovation (note 8). Part of the technique is to involve divergent personality types, such as divergent-thinking arts graduates and more linear-thinking science graduates.

The costs of innovation can be reduced still further by using prototyping and simulation tools. One clear example is the ‘Cambridge Phenomenon’ (note 9), in which 1,400 high-tech start-ups around the UK university were jump-started allegedly by the donation of CAD equipment to the university in 1972.

More recently, the Singapore government has invested heavily in digital prototypes of the ideas in the minds of entrepreneurs. These are multimedia representations to show products in use and action, in maintenance, in modular systems with other products, and in customised variations. A digital prototype is less costly than a hand-made model, and is more cheaply modifiable after input from customers, employees and critics.

From this understanding THT have incorporated various steps in their consultation process for measuring a company’s ability to respond to its own challenges. The first step is to interview potential customers in a company and elicit from them dilemmas they face currently, the issues they must resolve to move on, and the energy-absorbing puzzles that are impeding growth of their business.

Note that dilemmas are not necessarily negative; they are often about multiple ‘good’ things, the attainment of which can be mutually impeding. For example, how should an executive reconcile higher profits for the company with sharing gains with suppliers who have contributed to these profits?

We work with our clients to refine their dilemmas and then create instruments to measure the extent to which the company is resolving them – for example, by asking stakeholders to grade the scale of the problem and the likelihood of a short-term solution being achieved, each on a 1–10 scale. A simple graph of the results enables us to visualise the company’s perceived ability to deal innovatively with each dilemma.

We all have an innate ability to think innovatively. While we cannot measure things created in themselves (and nor should we try), we can measure aspects of the innovation process and create environments that reduce the barriers to innovation. By doing so, we can greatly increase the chances of innovation occurring in our companies. 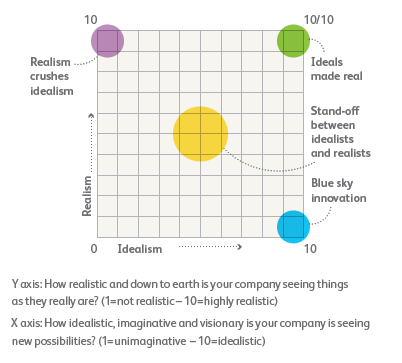